TomTom: Faster Journeys, Just When You Need Them 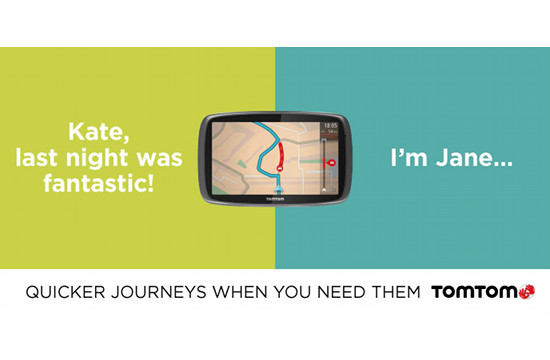 TomTom is launching their first ATL campaign in recent years, supporting the new TomTom GO device and reminding consumers that TomTom is for every day, rather than occasional, use.

The campaign, which targets current personal navigational device (PND) owners, will run across outdoor and radio as well as including an innovative and immersive social media execution, featuring top UK comedians, as the campaign develops.  It also represents the unveiling of the much-anticipated new brand positioning for TomTom.

DDB & Tribal Worldwide, Amsterdam who created the campaign was tasked with bringing to life the day-to-day struggle that is traffic, in order to trigger consumer behaviour and remind users to switch on their PNDs on a daily basis, rather than only using them when traveling to unknown destinations.

This campaign introduces the TomTom Traffic service, which comes as standard for all new devices. TomTom Traffic updates you in real time and gives you alternatives for quicker journeys.

It plays on insightful, funny, awkward reasons for wanting a journey to be over as quickly as possible, such as mistakenly thinking someone is pregnant, rather than simply portly, bumbling the name of a recent romantic conquest and cack-handedly insulting someone’s partner.  In this way it captures the collective consciousness of road experiences.

Mark Chalmers, ECD at DDB & Tribal Worldwide, Amsterdam said:  “Best friends or colleagues, husbands or wives, we've all dropped some clangers and a need for a quicker journey. Just like our scenarios, the TomTom device is for the daily commute, the airport trip or the big day out.

As the campaign develops, we'll be opening it up to the public with a real time, social media tactic, created by consumers, as they contribute live, via Twitter, to improvised comedy shows in cars. “

The campaign runs in the UK and Germany until the end of 2013.