‘Small Changes Are the Foundations of a Better Future’

Ahead of her ADCE Festival panel session, graphic designer Núria Vila explains how small acts of design can pave the way for a more sustainable world 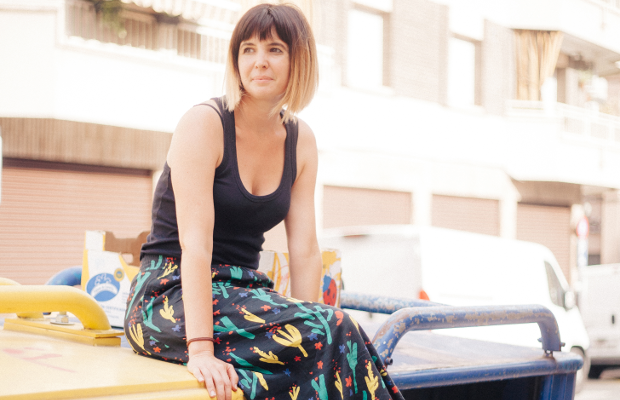 Núria Vila is a graphic designer and art director specialising in corporate identity, editorial and packaging design, and visual communication. But she’s not content just meeting her clients’ briefs. Núria believes that designers’ value can be simultaneously used to protect the planet.
At the end of this week, she will be speaking as part of a panel at the Art Directors Club of Europe (ADCE) Festival in Barcelona. In front of an audience of creatives and designers from across Europe, she will make the case that ‘Small Gestures are Powerful’, and that designers can be the generators of change. Specifically, she will be showing how, as the Earth faces an environmental crisis like it’s never seen before, designers can work with their clients to build sustainability into their brands.
In line with the creative conference’s ‘People for Tomorrow’ theme, Núria wants to encourage her audience to employ their creativity for good. LBB’s Alex Reeves asked for a sneak preview of what she’ll be saying on stage.
LBB> What's the core message you want to deliver to the ADCE Festival?
Núria> My message is that it is possible to do things differently. If we make even small improvements or changes in the way we design we can generate a positive environmental impact.
LBB> Can you give us a brief overview of your career (difficult, I know!)?
Núria> I studied graphic design in Barcelona. After working for a few studios I traveled to El Salvador to film a documentary about children with disabilities and the consequences of war. This experience changed my life. When I came back, I studied an art direction postgraduate degree, and I decided to become a freelancer. It was in this moment that I started applying sustainability to my projects.
LBB> Why do you see the ADCE as a good opportunity? Is there anything about the sort of people it attracts that you find particularly interesting?
Núria> I think that it’s a fantastic opportunity for me and this profession. There is a big need to open the conversation on what changes we can do in the present that will have the biggest impact for the future.
LBB> Was there a big moment when you realised the impact that design can have on the environment?
Núria> When I first began working independently I worked with my community, who was working in areas such as organic agriculture and sustainability.
I realised there was a lack of coherence between the way sustainable products such as organic produce were being grown and advertised and the way they were being packaged. I learned there is a sustainable way of designing packaging to align with my client's values. I realised green design was more than green leaves printed on the packaging.
LBB> Are there any particular examples of powerful small gestures that you would like to show to everyone? Stuff we can all learn from?
Núria>Going back to the concept of reusing and refiling can have a powerful impact.
Every minute we consume 1 million plastic water bottles and only 9% are recycled.
Furthermore, 50% of plastics are single use.
We can reduce the amount of plastics and waste by changing the way we consume.
As designers we have an important role in creating this change.
LBB> What are you hoping to learn, personally, from the ADCE Festival?
Núria> There are many positive aspects to this festival. Personally I would like to see what new things other people in my industry are doing. Learn new perspectives which will generate different ideas to help me tackle future problems in my profession.
LBB> Is there anything else you'd like to add?
Núria> Just want to emphasise that small changes should not be underestimated since they are the foundation for the better future we all want.

Call for Creatives: Building Conscious Business at the Creative Incubator 2020

The Art Directors Club Europe Launches The Annual of Annuals

How ADCE Festival 2019 Showcased and Inspired the ‘People for Tomorrow’