Salvation: Going Behind the Scenes on The Story of Life 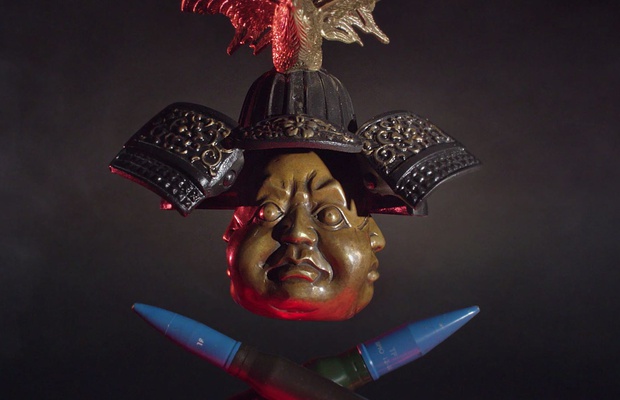 As hypnotising objects spin us through life and death, their glittering kitsch forms convalesce into the next stage of existence. Salvation, by Blink’s Noah Harris and Andy Biddle, presents us with one of the most beautiful and surreal depictions of being. On first watch, it’s hard to determine whether these eight mesmerising shorts (and the longer format combined film) are real or insanely good 3D work. Don’t be fooled by their fluid movement, every element was captured in-camera with real objects.

Going behind the scenes, director Noah Harris, producer Andy Biddle and post production company nineteentwenty tell how these unique films came into existence. The trio delve into just how tricky it is to suspend crystals, minerals, idols and talking heads when it comes to telling the story of life.
The sequence of films, each paired with a bespoke composition from Village Green composers, illustrate a take on the story of evolution in eight sequential stages. Beginning at the creation of the planet and the birth of life, the film explores the themes of reverence to power, industry and self-gratification, through to death and resurrection where the narrative goes full cycle. The narrative of each film is told by showcasing a labyrinth of discarded objects, found over four months of exploring through London’s flea markets and car boot sales, each attentively brought to life in camera with innovative rig work and seamless stop motion.
The Director’s Insight – Film By Film
The film starts at the creation of the planet in Element, portrayed using crystals and stones, giving birth to the origins of Life as plants and animals transform fluidly into each other.
“Life is about the birth of flora and fauna, but we allowed our own take on evolution here, so the first animal born from the primordial soup is a seal, which then becomes a rabbit, then birds, then a tree branch and water buffalo follow. Then we have the forbidden fruit – a golden apple, which transforms into an absurdly sexualised walnut shell giving birth to a blue egg – mankind. Perhaps we both ought to have had better science teachers at school.” Explains Blink Director, Noah Harris.
Life unfolds into Sentience, illustrating a dynamic portrait of humanity and human growth.
Noah adds “[This] is the birth of man. Reproduction creates mankind and then finally the lights go down and we see a golden superhuman. An idol”.
“Devotion is religion, faith, myth, legend. Or whatever you want to call it. Whether you’re religious or not, you can’t deny what a huge part of humanity it is and how much it impacts our lives. We wanted to depict this as a glitteringly alluring, yet darkly ominous force, constantly in motion - amorphous and seductive.” Says Noah. “Industry is a machine in perpetual motion. It is cold and mechanical, but hypnotic and again, seductive. It’s the constant march of progress. The wheels keep turning because what would happen if they stopped? The glass sculptures in this film are loosely inspired by Ettore Sottsass,” adds Noah.
Decadence explores self-gratification, greed and gluttony, with gold models including a mermaid, doughnut, and breasts of historical figures, questioning whether this is the inevitable degeneration of society into Oblivion.
A discomforting yet beautiful depiction of death, Oblivion then transcends into Lazarus where resurrection brings the entire sequence full cycle.
Noah adds “[Decadence] is about sex and drugs, the debaucheries of the human mind. A glossy surface-deep representation of escapism, nihilism and the human exploration of the mind and body.” And Oblivion demonstrates “The inevitable outcome - Death, violence, darkness… presented with alluring beauty.”
“The final film [Lazarus] explores what comes after death. We rise up through the clouds, in a pure white space, but are returned to minerals - earth, rock, bacteria, atoms, hippy crystals. We ask ourselves is it a regression or a progression? Or perhaps it is merely an oft-used cinematic trick to take us back to the start, giving the whole film a sense of perpetuity.” concludes Noah.
The Making Of – Perpetual Motion

Suspending the many eclectic objects in mid-air and animating them in-camera cast unique challenges for the team on set and back in post. Noah, Andy and nineteentwenty’s Ludo Fealy explain how they got such incredible results, using ambitious custom-built rigs, a lot of testing, some magic in post and a bit of spontaneity.
Because of its delicate and complex nature, the shoot itself took two weeks of intense filming to complete, and approximately four months of ‘car-booting’, in the lead up, to find the objects. Noah explains that the objects lead the creative for the films, aiming to tell the epic story of man in a distinctive and visual way:
“We needed to define, quite clearly, a subject matter for each film. We could then start to look for objects within these relatively loose boundaries. The whole point was that it should be a journey of discovery throughout. Every car boot sale we visited bought new ideas to the table. As we got further into the process, we could start to choose specific objects and seek out others which could link them together to create that seamless morphing-feel we have throughout the films. This is when we really had to start finding specifically shaped and sized objects. Once we had collected the objects, Andy and I began by conducting a lot of tests, doing rough animations of objects becoming other objects using our phones to shoot. We then spent a couple of weeks down in St Leonards-on-Sea in Robin Crowley’s workshop (one of our art directors). This was where we did much of the prep work; cleaning, chopping and spraying.”
When it came to the final films, the many objects were suspended by numerous supporting rigs which held them in their floating reveries. Every single rig was removed delicately, frame by frame by nineteentwenty. Explaining the intricate process VFX supervisor and co-founder of nineteentwenty, Ludo Fealy says:
“We knew from the moment Noah and Andy told us about Salvation that it would be a stunning project to be involved in. We absolutely loved working on it. There were a lot of shots to work through. Noah and Andy brought us in early in the process to talk through each scenario, letting us know what was and wasn’t possible in terms of hiding rigs, capturing clean plates and all the different lighting conditions that were going to be shot.  For the most part, we had everything we needed to de-rig each shot but sometimes during the filming of such intense pieces’ things get knocked, or forgotten and mistakes happen.  It’s to be expected.”
In addition to the structural elements, nineteentwenty also composited many of the shots with 2d backgrounds and different lighting passes, along with additional shot elements, such as smoke passes. Ludo continues:
“There wasn’t any requirement for CG in these pieces, but there were a couple of sequences that slightly blew our minds.  In Industry, for example, the two passes were both shot from above the same table. They had the same camera move but with two different lighting states.  As a result, we then had to flip, flop, reverse, roto, hold our noses, cross our fingers and… voila!  Noah and I weren’t quite sure how it worked but the result is fantastic.  That piece can be put on a constant loop. Forever.  Which is the way it should be watched!”
Noah adds: “We wanted to create this idea of a 360º machine in perpetual motion. We couldn’t afford motion control. So, our DP Toby Howell and Max Halstead devised a manually controlled rig to shoot the shot. It was big, unwieldly and ambitious but it worked beautifully. It created one of those really satisfying shots where you’re not really sure how it’s done and you’d assume it’s CG trickery. But in fact, it’s all in-camera –seamlessly stitched to a copy of itself”. Explains Noah.
With many different forms of lighting through the shoot, Producer at Blink, Andy Biddle explains that some films required more from post production than others: “One of the most difficult films for me was Element. Unlike the majority of the other films, there were objects in the air the whole time in Element which meant a lot of complicated rigging. It was also one of the most difficult in terms of lighting. For each increment of animation there were 10 different lighting exposures which we would later composite together in post. These days you have something called DMX - on which you can program lighting set ups which automatically change per exposure/per frame - but on this occasion, all these lighting changes had to be done manually.”
Concluding on the project, Noah says: “There’s something great about taking huge subjects like evolution, religion, debauchery, beauty and death, and irreverently chucking them all into a blender to see what happens. It’s probably all tied into the fact that I grew up in a liberal household with pagan leanings in a farming town in Devon where the Church of England was the centre of the community. Small pious Devon towns are notorious hotbeds of clandestine debauchery, so you can see there was quite a melting pot in which to immerse my young and impressionable brain!”