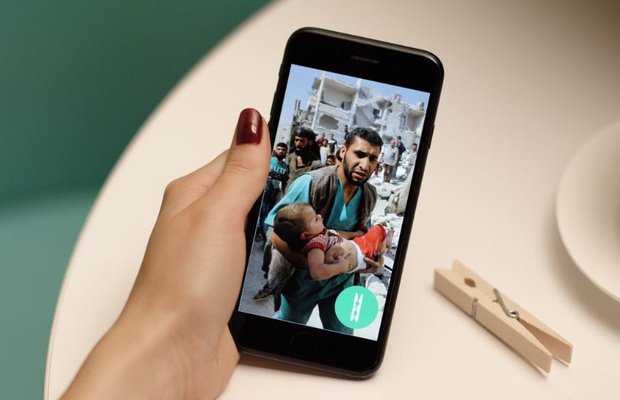 The Syria Campaign has leveraged the symbolism of clothes pegs to create a new campaign with the aim of increasing public pressure on politicians looking to shift the EU and other key countries to a more pro-Assad position. The launch of the campaign follows on from a suspected chemical attack in the country on Tuesday, killing dozens in Idlib province.
Developed in-house by the independent advocacy organisation, the PEG campaign acts as a creative way of explaining the complicated diplomatic situation currently concerning Syria. London-based production company, Armoury, brought the concept to life and was responsible for directing and casting the film, and creatively directing the animation.
Borrowing the clean-cut and inspirational tone of a tech crowdfunding campaign, the satirical film pitches the ‘Personal Embarrassment Guard’ (PEG) as a ‘new wearable’ that blocks the ‘awkward’ stench of war-crimes, in order to help diplomatic leaders continue their negotiations with Syrian dictator, Bashar al-Assad, without being impeded by their moral compass.
Flaunting PEG’s ‘nasal technology’, the satirical product film rolls into a montage of the content faces of PEG-wearing diplomats, complete with upbeat, inspirational music, before abruptly cutting to real life footage of the devastating conflict in Syria. Targeting the Brussels Conference on supporting the future of Syria and the Region on 5th April, the campaign film will be distributed to journalists covering the talks and be supported by a stunt at Brussels.
Working off the brief for the film to stylistically resemble a crowdfunding campaign, Armoury seamlessly fused together the two influences of a polished, jargon-filled smart-tech product launch and the stuffy world of EU politicians to craft the perfect balance of humour and satire. Securing a suitable cast and drawing out believable performances was key to capturing the novel concept whilst effectively communicating the important message.
Director Jack Laurance of Armoury, comments: “The project was immediately appealing to us for the level of creativity and humour being levelled at such a serious subject. Re-creating the world of the PEG product and its well-trodden visual cues was a great exercise. It goes without saying that these sorts of projects allow us to focus on a moral imperative, as opposed to a commercial one. But approaching it creatively was the key and one that James Turner at The Syria Campaign led from the beginning. They were fantastic to work with.”
James Turner, Communications Director for The Syria Campaign, comments: "Armoury immediately understood what we were trying to do with the PEG concept and the collaboration was effortless. Jack and the team brought it to life so cleverly, and with such craft, that it felt like the idea had been two years in the making. The fact that it only took two weeks is almost making me pinch myself. Or perhaps peg myself.
The campaign film launches today, while the stunt in Brussels and the product will take place on the 5th April.
https://www.nosepeg.com/en

Armoury Introduces a Dystopian Gym Landscape for Pay as You Gym

Armoury Takes Drinking to Hedonistic New Heights for The Berkeley