Never Give Up: A Stroke Survivor Hopes a Font Based on Her Handwriting Will Inspire Others

Ahead of World Stroke Day, Laura Swinton delves into a touching typographic journey 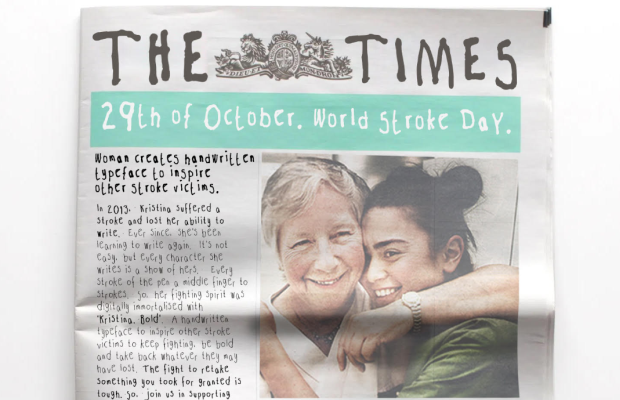 For Stroke survivors, the struggle to relearn skills most of us take for granted is a long, arduous and occasionally faltering one. There are few more potent encapsulations of the indomitable human spirit. When creative team Sherwin + Conrad met Kristina Hellgren, a 52 year old Swedish woman who had taught herself to write after a devastating, they decided to help her spread her inspirational story – in order to help motivate survivors to keep fighting.
The pair (Conrad Haddaway and Sherwin Teo), who are creatives at 72andSunny Singapore, have turned Kristina’s handwriting into a font that anyone can download and use. Each c letter symbolizes Kristina’s determination – or as Sherwin + Conrad put it ‘every character she writes is a show of hers’.
“It’s taken years of practice,” says Kristina, explaining just how long it has taken her to regain her ability to write ever since a stroke left her partially paralysed. “I had to start with learning how to talk again, then moving on to reading and eventually writing. When half of your body goes paralyzed, so does half of your brain. So, I used learning apps for children and practiced every day with my family. I also used online newspapers that are specifically made for stroke victims, where you can read the news but the stories are simplified.
“For me giving up was never an option, I was determined to make things go back to how they used to be. The doctors would tell me the more you practice the more you’re going to be able to take back of you abilities.”
Conrad first met Kristina when visiting his girlfriend Sara’s family in Sweden. Kristina is a friend of the family and works in a bike store owned by Sara’s family. "They told me the story of her stroke over dinner. It was really scary to hear something like that can just completely blindside you and flip your life upside down,” says Conrad.
The idea hit him suddenly one day. “But the thing that really swung me was Sara’s dad, Tony coming into the kitchen at breakfast, wearing a t-shirt that Kristina had hand-written. It said “Ge aldrig upp” (never give up), and I was like “Fuck. That’s cool.” It hit me super hard and from there, it just felt like the natural thing that had to be done. So I started thinking about it, spoke to Sara and Kristina, dropped Sherwin a message and we got on it,” he says. 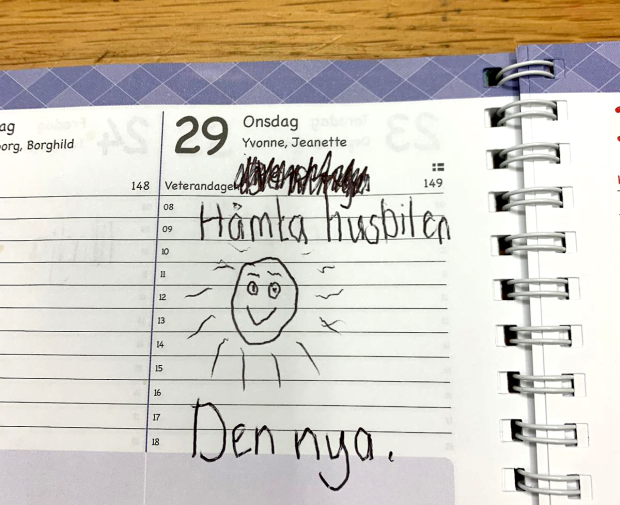 Kristina's notes
The more he hung out with Kristina in the back office of T&K’s Cykell, the more he saw her fragile script on notes and files. He was determined to do something with it.
“I thought it was a good idea and a good way to inspire others in the same situation,” says Kristina of her initial reaction to the idea.
Conrad and his creative partner Sherwin, with whom he’d also studied Graphic Design with at Central St Martin’s got to work. It wasn’t a conventional typography project as it had to be a font that embraced imperfections. The spoke to some friends who had created fonts and figured out the rest from there. Developing the font also involved many Skype calls between Singapore and Sweden, with Sara acting as translator.
From Kristina’s perspective, the project was rewarding and insightful. A newcomer to the world of graphic design, she particularly enjoyed the learning aspect.
“Conrad sent Sara some papers to write on and Sara printed them out for me. I wrote all the letters in the English and Swedish alphabet and Sara scanned them and sent them back to Conrad,” she says of the process. “It was quite a challenging but very fun experience. It was interesting to see how it works when you create a typeface and the result was really powerful.” 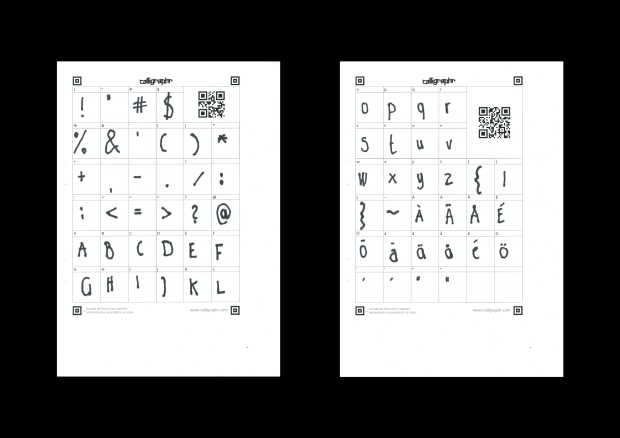 Scans of Kristina's handwriting
For Sherwin and Conrad, they also found deep satisfaction in what they say was a relatively ‘pure’ design project. “This is one of those things that felt true to the whole “medium is the message” thing. It was interesting to us to look at typography as the creative expression itself and not just a way to supplement other designs. Type, for sure, is super trend driven, and it’s easy to get Designer FOMO. So, it was really refreshing to just fuck all that and stay true to the pure, inspiring little nugget of what this project is.”
Now that the font is out in the wild and available for anyone to use freely, the creatives hope that individuals and publications will replace their usual typefaces with ‘Kristina Bold’ on October 29th, World Stroke Day. 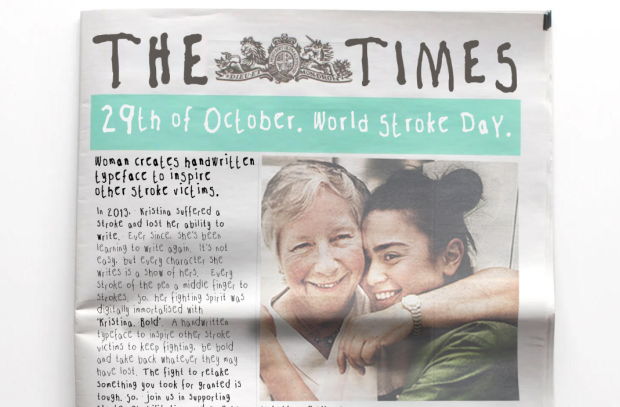 “It’s intended to be a message of hope and defiance to others either affected by strokes or people with those close to them who have. When you lose the ability to do something that was once so simple, I’m sure it’s fucking easy to feel hopeless. But, Kristina’s proof that if you really fight for it, you can take it back. It’s fucking badass. One thing that really touched all of us involved was this one comment on reddit from someone whose mum had also suffered a stroke. For us, that’s exactly what this is all about. But truthfully, we don’t feel like this project’s fully done yet,” they say.
“Our dream is to get publications and newspapers to change their frontpage typeface to this on World Stroke Day (Oct. 29th). That’s what we’re currently pushing really hard on right now. So, if you own or work at a publication, we’re looking at you. And at the end of the day, we’d just love to see other Designers use the typeface to make work that means something to them. We all want to see Kristina get her ability 100% back, so we’d love to make this a progressive thing and revisit it next year!”
As for Kristina, she hopes that stroke survivors and their families will take strength from Kristina.Bold. “I hope it helps people continue to fight to take back what they’ve lost. I want other victims to not be ashamed of their struggles and of course, to never give up.”
Download Kristina.Bold here.