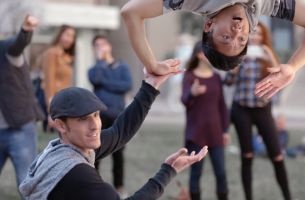 McMorrow showcases his specialty for perfectly executed in-camera effects in the broadcast spot 'Middle,' juxtaposing the movement of his camera with the freeze-frame world to create a compelling dynamic that arrests the eye. The camera spins around caught-in-amber moments happening around the bustling town square, providing a unique perspective of the action.

In the first ad previously released for Presidents' Day, McMorrow captures a celebration that pauses for the cause. The camera stops to accentuate key moments at a holiday parade while being driven by a bouncy score, resulting in a clever spot that mixes glossy imagery with an array of shots. Closing out the fresh Nissan campaign with the spot “Final Days,” which rolled out March 19.

Gerald McMorrow is a UK-based director who has brought his distinctive filmic style to helm hugely successful ads for major brands like AOL, Brittany Ferries, Jaguar, Panasonic, and Seat. His track record for creating hugely successful campaigns has led him to pick up awards from the Creative Circle, The Green Award and the British Television Advertising Awards along the way.

Most recently, McMorrow blended live action footage with familiar animated brand mascots to create Tetley Tea’s immediately celebrated “Best of Britain” campaign. McMorrow walks the viewer through the Brit’s leaf-loving past since the brand’s beginning in 1837 with a tongue-in-cheek commercial that gives a nod to Tetley’s role as a ‘catalyst’ for some of the most iconic moments in British history.

McMorrow is also established in the feature film realm, having written and directed the 2008 noir fantasy thriller Franklyn, starring Ryan Philippe and Eva Green, as well as the short film, Thespian X, which screened at the Berlin and Tribeca Film Festivals.

Gerald McMorrow is represented by MOONDOG for work in the US.