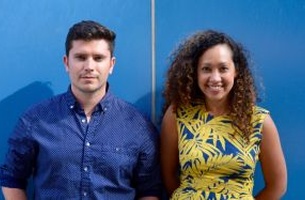 Moondog Films has launched a new division dedicated to producing long-form content and has brought on Director David Godin as the division’s first roster director. The company has also named Rasha Clark to lead the division as Head of Content. In addition to being named to lead the new content division, Clark has also been named Executive Producer of Moondog VFX, the visual effects arm of the company. The announcement was made by MOONDOG Partners Pete Kasko and Bernadette Quinn and EP/Director of Business Development Sophie Gold.

“David and Rasha are two passionate and committed talents who impressed me with their plans for creating content that would impact people in meaningful ways, both for agencies and brands as well as of a more personal nature,” say Kasko, whose title is Chief Creative Officer.

“We’ve been incredibly busy working for agencies,” adds Gold, noting that Moondog Films just wrapped a large, multi-day shoot for Nissan in California. “Bringing on David and Rasha will help us extend our reach in the long-form content space with engaging and compelling stories. We’re excited to have them as part of the family.”

“I love the fact that this studio is open to all sorts of projects,” says Godin of his new roost. “We don’t want to label ourselves or restrict what we’re doing; in addition to working for agencies and advertisers, we’re also talking about everything from TV series to features. Pete and I spent hours talking about the potential to do some amazing things, and he’s a real ‘yes’ person, an energetic creator of ideas. I’m looking forward to working with him and everyone else on the Moondog team.”

Godin came up through the production ranks and approaches his work with a visually-driven cinematic look. He directs docu-style work that focuses on authentic, human stories, shot in a way that blurs the lines between documentary and narrative filmmaking. His showreel includes projects for clients such as American Express, Ford, Pepsi, Avon and others, shooting for agencies like 360i, Adam&Eve/DDB, BBDO, Digitas and Team Detroit. His branded music spot for AT&T, “We Need Love,” won First Place in the MOFILM Cannes Lions competition in 2014.

“My intentions as a filmmaker and creator for brands and advertisers are to generate content that promotes and benefits our underrepresented and minority populations,” Godin adds. “I strongly believe the future of content is rooted in multiculturalism, and that it’s our responsibility as content creators to enlighten audiences with stories that promote less mainstream perspectives. It was so encouraging during my meeting with Pete when he looked me in the eye and said, ‘David, I want to create work that’s going to make a better world for my kids.’ That’s when I knew we were kindred spirits.”

Clark, who’ll lead the content effort while also serving as EP for Moondog VFX, brings an eclectic background to her new positions. Born and raised in Bahrain, she moved to New York in the late ‘90s and worked at a variety of offbeat jobs before landing in advertising production. A well-known extrovert with a passion for performing, she’s worked at some of the city’s best-known editorial and VFX studios, having launched her career at Blink VFX before moving on to Red Car. She also spent four years as EP at the post house Goodpenny. During her career she’s handled projects for brands like Nike, Calvin Klein, Revlon, McDonald’s, Under Amour, Revlon and many more.

“Everyone at Moondog is very supportive of how David and want to grow the division,” Clark says. “We’re creating our own content and planning an expansion into Asia, which is an area I’ve wanted to explore for some time. That we’ll be doing this under the Moondog banner is a truly exciting opportunity.”