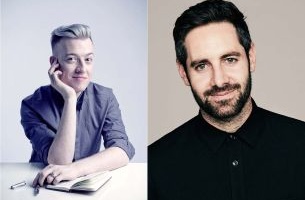 From the pages of top shelter magazines and the aisles of America’s leading retailers to the couture studios of London, Justin Coit and Stephen Lally have got you covered. The two filmmakers, one an expert in capturing stylish yet authentic scenes of real people as well as celebrities, the other a visual stylist at home with the most exclusive fashion, beauty and luxury brands, have joined Moondog Films in New York.

The announcement was made by Moondog Films EP and Director of Business Development Sophie Gold and Pete Kasko, Partner and Chief Creative Officer of parent company MOONDOG. Re-launched last summer, MOONDOG is a collective of five integrated departments: creative, films, edit, VFX and music. Together they offer agencies and clients a one-stop, concept through completion creative, production, post production, music and audio resource.

He describes his directorial approach as someone who creates uplifting stories of an aspirational lifestyle, “but told with a fashion twist,” he explains. “I believe it makes them feel more sophisticated, but at the same time relatable. That’s a consistent thread in my work, whether in print or motion; everyday people are able to see themselves in these images and settings.”

A good example would be his collaboration with the actress and entrepreneur Alba, whom he met while on a magazine assignment and for whom he’s gone on to shoot integrated print and commercial campaigns for her line of personal care products, The Honest Company. Many of the TV spots feature real mums talking about the products with unmistakable sincerity. “I’ve helped shape the look and the styling for this brand in a way that shows what it takes to be an honest mum,” says Coit.

Lally brings a passion for the fantastical, irreverent and mysterious to much of his work, whether in music videos, fashion films, shorts or commercials. And his talent for design and illustration adds another dimension to his work as he immerses himself in the details of costumes, set design and storyboarding of his films.

He has directed beauty spots for such brands as Rimmel London, P&G’s Wella, Soft & Gentle, Pro:Voke Touch of Silver and Apricot apparel, as well as a series of highly stylized, visually-opulent music videos for artists signed to such labels as Universal, Sony and Warner. His short films similarly present fascinating worlds of visual wonder that make them look like the work of Jean Paul Goude and Federico Fellini’s love child.

“I love dramatizing the art of fashion and beauty,” Lally says, “and creating an entire world within a frame of film. I’m very hands-on in this regard, whether its styling, hair, makeup – it’s all about creating these tableaus, and that passion has carried over from my short films to my work in advertising.”

Both directors credit Moondog’s Sophie Gold as one of the reasons they've signed with the company. Coit had worked with her previously at Looker, where they collaborated on a series of docu-style short films for Electrolux, “and I really enjoyed the experience,” he says. “She’s dynamic, easy to talk to and has great relationships with clients.”

Lally uses similar terms to describe his new EP. “She’s a dynamo,” he claims. Brought together by a mutual colleague in New York, Lally says that after meeting her and touring the MOONDOG studios in Chelsea, “I really responded to her ideas, and I think what they’re doing is brilliant, having all of these capabilities in tandem. I’ve done a lot of client direct work in the fashion world, and that can be a very intimate process, so having access to all of these capabilities under one roof is amazing.”