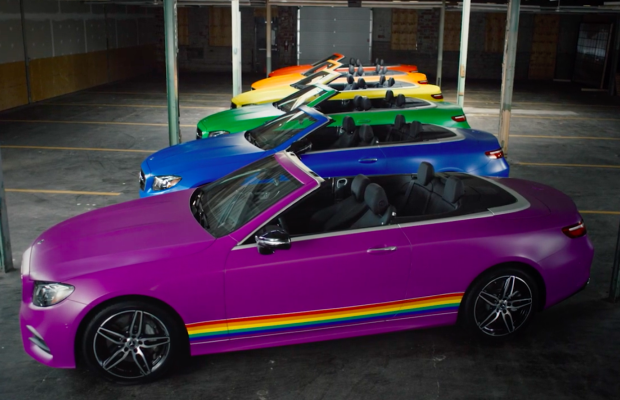 In celebration of Pride, Mercedes Benz Canada released a short video series that features members of the community sharing their stories of love and acceptance. In a celebration of diversity, the six colours of the Pride Flag were mirrored in six Mercedes.
The work was directed by Bob Purman from Sequoia Content, his second round collaborating with the brand and Publicis Emil. Over 19 people were interviewed in two days, and each shared their connection to one colour of the flag in particular, and each with a unique story. Though the original plan was to interview just six people, the amount of people who were willing and excited to come forward with their experiences tripled that number. “The casting agency (Ground Glass Media) did a fantastic job. When the casting came in, I was blown away by the power of the stories... I began to lobby for interviewing everyone who sent in their story,” Bob said. Originally, subjects sent in videos of themselves filmed on their phones and computers. Their openness was the inspiration for Bob to mirror that process in his approach to lensing.
Rather than a typical teleprompter set-up for the interview where the director’s image is projected onto the screen, they decided to create a ‘selfie mode’ simulation. They ran the main video feed onto the teleprompter instead, so that subjects could look at themselves. The result was powerful, “It really affected performance and storytelling because they were in charge of telling their own story. We had just set up the conditions for telling it,” Bob said. Though there were multiple cameras on the interviewees, this inventive selfie set-up created a remarkable sense of intimacy and openness that shows in each interview.
Subjects were able to share their own association with each colour of the flag, and bravely share their story. Red, orange, yellow, green, blue, and purple, each highlight the values of Pride.
Bob adds: “It was a blast to shoot and really an honour to be a part of telling these stories.”
#DrivenByDiversity
Blue:
Red:
Orange:
Yellow:
Green:
Purple: