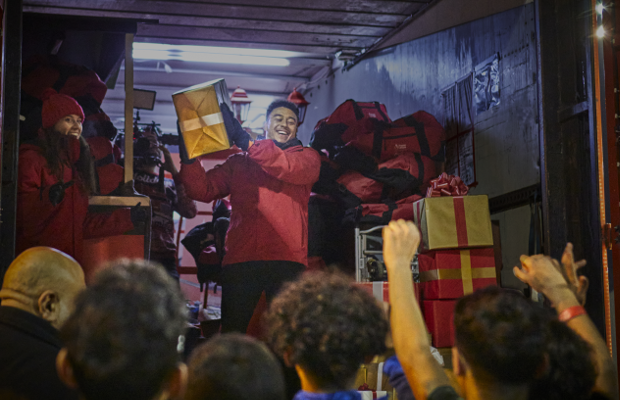 Last night, Premier League star and Coca-Cola ambassador Jesse Lingard made a surprise appearance at a StreetGames training session in Manchester, arriving in the iconic Coca-Cola Christmas truck to deliver football gifts to young adults.
Arriving at the Belle Vue Leisure Centre, where StreetGames had organised a skills training session and 5-a-side matches for three Manchester based projects, Jesse surprised fans by appearing from the truck to hand out gifts including footballs, kit bags, football socks and beanies on behalf of StreetGames and Coca-Cola.
Getting in on the action himself whilst donning his own Christmas inspired jumper, Jesse joined the players for a kick-about to celebrate the ongoing work of StreetGames, which aims to ensure sport is accessible to disadvantaged communities across the country.
Jesse Lingard, Coca-Cola ambassador, said: “I have always loved the Coca-Cola Christmas Truck, it's iconic, and I can’t believe I got to drive in it through my hometown to surprise the players this evening! Football has given me everything, I was always out playing with friends every opportunity I got, so I’m really happy to support the brilliant work StreetGames is doing to bring the sport to even more people. It was great fun to bring a bit of festive excitement and get involved this evening!”
Kris Robbens, marketing director for Coca-Cola Great Britain and Ireland, said: “We are very proud of our 10-year partnership with StreetGames and we continue to support their aim to provide aspiring young adults, with more access to the sport they love via our ‘Where Everyone Plays’ campaign. We’re really excited to have Jesse help us bring some extra Christmas magic to people in Manchester and what better to deliver gifts than by the Coca-Cola Christmas truck!”
Now in its 10th year of partnership, Coca-Cola has a long-standing relationship with StreetGames, supporting thousands of young adults throughout the UK to enjoy more sports and activities, with the aim to transform lives and bring people together to break down barriers in communities.
The surprise comes after Coca-Cola and StreetGames launched its ‘Ball Games Allowed’ initiative this summer. Having found that 50% of young people find it difficult to play football in their local community because of restrictions on outside space or a lack of coaching staff, Coca-Cola pledged £200,000 to support increased access to pitches and coaches.
The Coca-Cola Christmas truck made its surprise appearance in Manchester before continuing its annual tour around the country, which will finish in London on the 15th December.

Invesco and LIDA Update the Old Masters for Brand Relaunch