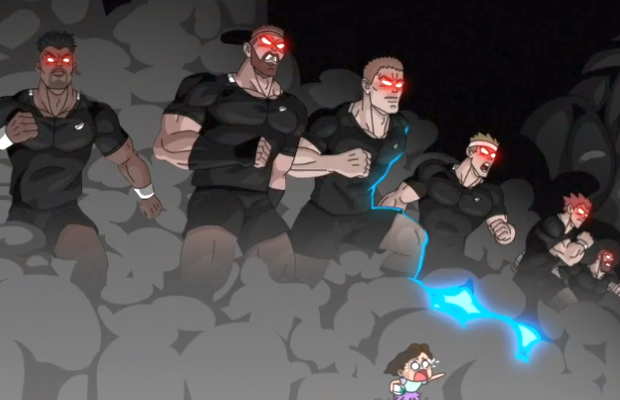 To promote ITV’s coverage of the 2019 Rugby World Cup, ITV Creative has collaborated with Stink Films’ Keith McCarthy and Golden Wolf.
This is the tournament that fans have been dreaming about and the film shows fans from every one of the home nations as they slip into slumber, their dreams taken over by excitement and anticipation of what they will see in Japan.
Inspired by elements of modern Japanese artistic culture, each fan’s dream takes a different journey through anime, drawing on influences including renowned Manga artists Katsuhiro Otomo (Akira) and Satoshi Kon (Paprika), 16 Bit games such as Street Fighter and Tekken and classic anime, such as Battle of The Planets and Dragonball Z. As the sun rises, each fan emerges from their visions, bleary-eyed, in front of their screens as their team prepares for a match.
The nature of the tournament’s schedule means that the matches are shown early morning in Great Britain, so the campaign line, used across all comms, encourages viewers to “Rise for the Rugby World Cup.”
Tony Pipes, executive creative director for ITV Creative, said: “We wanted to create a piece that captured the excitement and tangible giddiness that rugby fans have been feeling with the kick-off around the corner. We felt Japan’s rich and pioneering history with animation made it the perfect medium to translate the physicality and action of the game and tease what I’m sure will be a unique and historic tournament.”
Keith McCarthy, Stink Films director, added: "The RWC project really is a dream job. So many elements and teams coming together to craft a great film. The script itself was so singular and clear in its ambition and I wanted to push all the ingredients; the cinematic live action, the authentic anime-inspired animation, inventive transitions that blur the lines between the physical and animated. The challenge of working in dual worlds of performance and animation made so much easier with the infinite knowledge and smarts of Golden Wolf. Dream job.”
Chris Anstey, ITV marketing manager, said: "Because the Rugby World Cup is taking place in Japan for the first time, we already know it's going to be like nothing else rugby fans have experienced before. The collaboration between ITV Creative, Stink and Golden Wolf for ITV’s RISE campaign aims to tap into the way the tournament grips imaginations and capture the promise of a spectacular event awaiting on the horizon in September on ITV.”

52 Artists Came Together for These ITV Idents