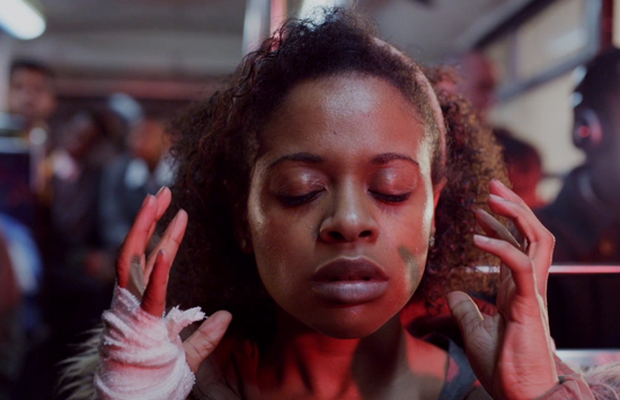 The 51st annual New York Film Festival is currently underway, with 35 of the most anticipated features of 2013 being screened in locations across the city. The festival’s Shorts Program showcases a selection of original shorts from the world’s most promising filmmakers, and we are delighted to announce that Irresistible short, Frayed has made the cut.

We speak to Frayed director, Georgia Oakley about the festival, the film and the inspiration behind it.

Frayed is one of only 20 shorts to be screened at the festival, how does it feel to be selected?

It feels great to be recognised by such a prestigious festival. The whole festival process is totally subjective; we have been rejected from some much lesser known, small festivals, which puts the whole thing into perspective – It’s just one group of people's opinion versus another. That said, NYFF is the grandfather of American Festivals - and probably the most respected festival I will ever have the honour of being part of. It is in its 51st year, the line-up is packed full with the work of my favourite filmmakers and I can't wait to get out there to represent our film.

How would you describe the film to someone who hasn’t seen it before?

Frayed is a wild mix of animation and live action. Some have deemed it an 'experimental film' due to its non-linear timeline. But there is a narrative there, so personally I wouldn't categorise it as experimental.

It tells the story of a young woman, plagued by imaginary terrors, who struggles to keep a grip on reality as she travels home on a bus. It is a collaborative piece of art, more than it is a short film, due to the huge volume of contributors that lent their expertise and helped to create something fresh and exciting. Over 75 people were involved in making this film - which for a 9 minute film, seems utterly over the top. But I think that is what gives it such a textured narrative. For instance the relationship between sound and image in particular is something that we really explored, which adds another dimension to the piece.

What initially attracted you to the script?

It was the existing ideas that attracted me to the project - the blend of live action and animation, the immersive nature of the story - as well as the challenge of making a film that relied so strongly on us getting inside the character’s head. I like making films about non-verbal communication, that don't rely too heavily on exposition or dialogue, so this was a perfect match for me. Plus it was unlike anything I had attempted before (or since)!

What challenges did you face during production?

We were making a film about a girl who travels home on a bus at night in London - but our bus was locked down in a depot in Kent. I think that was our single most difficult challenge... how to make a bus look like its driving through the streets of London. The changing lighting scape is so complex and almost impossible to replicate on a budget, but somehow Dan and his team managed to achieve it. I take my hat off to them. And the rest of the crew who were lumped with the task of physically rocking the bus for two whole nights in a row! Oh and the bus broke down mid-way through night one of two - but I won’t bore you with the details, needless to say - it was a bit of a nightmare!

Who influences you as a director?

French directors, Jacques Audiard, Céline Sciamma, Jean-Pierre Dardenne and Guillaume Canet are some of the most exciting filmmakers working right now and the types of films they churn out, with their intriguing, often quirky story lines and incredibly nuanced characters are the types of films I would love to make.

Hand in hand with those guys would be Spike Jonze, Michel Gondry and Charlie Kaufman whom I adore for their idiosyncratic style.

Derek Cianfrance and Sean Durkin are two of the young greats; their style straddles both the off-beat experimental and more commercial realms, which is something I see in my own ideas. Marianna Elliot (theatre director) is also a hero of mine and offers an effortless master class in collaboration, I have learnt a lot about the relationship between sound and image from both her and Lynne Ramsay. I also have a lot of respect for the female filmmakers who are changing the face of commercial cinema, especially Brit Marling, whose Another Earth shows shoestring filmmaking at its best, Lena Dunham and of course Kathryn Bigelow for last year's Zero Dark Thirty.

What advice would you give someone who wants to be a director?

I'm just starting out - but one thing I would say is, don't make too many decisions or too many plans. Try and go with whatever you feel at any particular time, maybe you'll start out as a director and move into cinematography, maybe you'll want to direct but realise you are more adept in the art department. Maybe you want to make drama but you get offered the chance to work on a documentary overseas... just try everything because you never know - you may think you have it all planned out but I'm sure the best things happen organically without too much time to prepare! Set your expectations low and hope to be continually surprised.

Frayed is screening at New York Film Festival on Thurs 10th October at 12.00pm. For tickets and info, go to http://www.filmlinc.com/nyff2013/films/nyff51-shorts-program-2