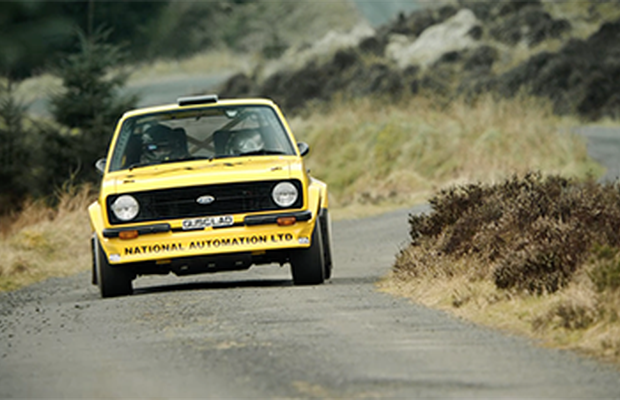 Gaslight have put the pedal to the metal in their latest work for Rothco and comms brand eir's 'Convergence' campaign.

In Rally Drivers, we meet Cormac & Katja. They live together, work together and are totally in love. Which is just as well, because in their spare time there's a lot of shouting going on as they drive ridiculously fast down very small roads.

It's a nice continuance of the fun and playful nature of the campaign that has been running since late last year but it had its challenges when it came to the production.

Co-producer Mick O'Connell said: "Anything to do with cars has a variety of factors you need to keep an eye on but with this one, the watch-outs were everywhere when we took the health & safety aspects into account. Also, because we're gluttons for punishment, we shot it in February in the middle of the Wicklow Mountains. The crew bus cracked through a few ice puddles on the road on the way to set and we were looking at each other but the weather came through for us and we got great stuff. Cormac & Katja were naturals and their chemistry really brought the creative to life."

Dave Davin, co-producer, adds: "Technically speaking, this was a nice challenge. We had three camera units on the go to maximise the daylight time; the main unit on the Alexa Mini, a drone team and a small format team with grip for the on-car footage. So we hit it hard but we put together a great crew and the day flowed really well."

As with the other work in the campaign, two versions, a 30' TVC and a 60' digital, were produced. The TVC went on air at the start of April and the reaction has been really positive.

Bringing Oddball Filmmaking from Sofia to Dublin with Kevork Aslanyan

From The Big Apple to The Emerald Isle with Rory Hanrahan