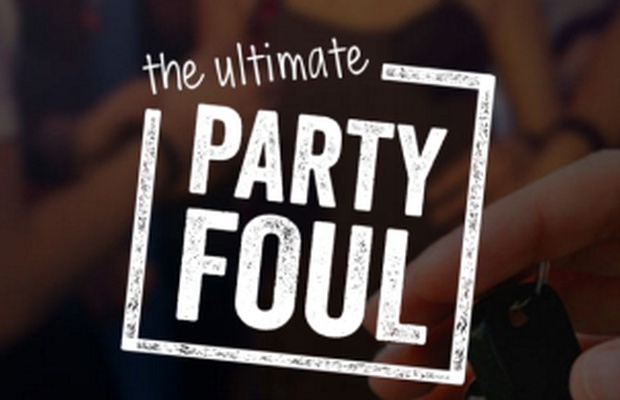 Targeting 16-18-year-olds, the PSA follows teenagers making a series of “party fouls” -- from the minor (chugging hot sauce until you’re sick) to the more serious (smashing the beer pong table) to the ultimate bad decision -- drinking and driving. The spot concludes by directing teens to ultimatepartyfoul.org, where they can find tips on how to avoid the “ultimate party foul” and learn about the real consequences of underage drinking and driving.

“For us at Merkley, it is always a pleasure to collaborate with René Villar-Rios at Durable Goods,” Andy Hirsch, Executive Creative Director at Merkley + Partners. “As a director, he has that rare talent and ability to capture humanity in an honest and authentic way. For our Ad Council Underage Drunk Driving ‘Party Foul’ spot, René also shot the entire film with handheld mobile devices that gave the project a unique, realistic look and feel. I know that our Creative Team, Kaitlyn Froboese and Marie Strycharz, and our Agency Producer, Scott Mushinskie, were all very happy with the final results!”

“We wanted to make it feel like a real teen party,” says Villar-Rios, who collaborated with Durable Goods Partners/Executive Producers Michael Merryman and Hani Selim to ensure that every detail reinforced the campaign’s authenticity and teenage appeal. “The footage had to come off like an amateur shot it, rather than a professional filmmaker. As a father myself, I figured if the spot could speak authentically to my own teen daughter, then the message would be effective.”

There were inherent challenges in creating this sense of realism, given the restrictions on portraying alcohol consumption in on-air advertising – and particularly, portraying underage drinking. Shooting with teenage talent presented an additional layer of difficulty; however, Durable Goods strove to responsibly push the concept as far as possible with the presence of alcoholic set dressing and props, such as the wine and beer bottles, and the teens holding red and blue plastic cups. Recognizing the need for total control over the shooting environment, the Durable Goods team turned to Production Designer/Art Director Brad Ricker, whose work on epic films like “Inception” and “Mission Impossible III” made him the perfect, if ironic, choice to recreate authentic YouTube moments.

Villar-Rios also credits the casting director for heightening the sense of realism by selecting age-appropriate-looking talent who could not only pass as real teenagers, but could also perform some of their own stunts in the more physical “party foul” scenarios. Villar-Rios, who recently worked with child performers on an international spot for IKEA, knew how to foster a collaborative and loose acting environment in order to best capture the vibe of a real house party.

“Whether you’re working with child actors, teens or adults, you just need to be honest, clear and self-aware,” says Villar-Rios. “If you have a direct connection and open communication, you will get the right performance.”

The project was shot over the course of two days in a Los Angeles home that stood in for nine different settings. The team shot on three different iPhones, keeping two rolling at any given time while footage from the third was being downloaded. All of the footage was shot in camera with no filters. The DP framed the shots to look off-balance with a shaky, hand-held style in order to mimic an inebriated teen perspective, while in post, the editor cut the vignettes with a home video sensibility.

“We knew even the smallest detail could change the impact of this PSA,” says Villar-Rios. “As a director, you always want to look at a project and ask, ‘what does this concept actually need?’ In this case, the iPhone captured the look and feeling of found footage. It wasn’t much different from the process of shooting with any other camera, as we gave the same consideration to factors such as lighting. We’re all really happy with the end result.”

And what did the ultimate arbiter of teen taste say?: “I showed the finished campaign to my daughter, and she gave it her approval,” concludes Villar-Rios.