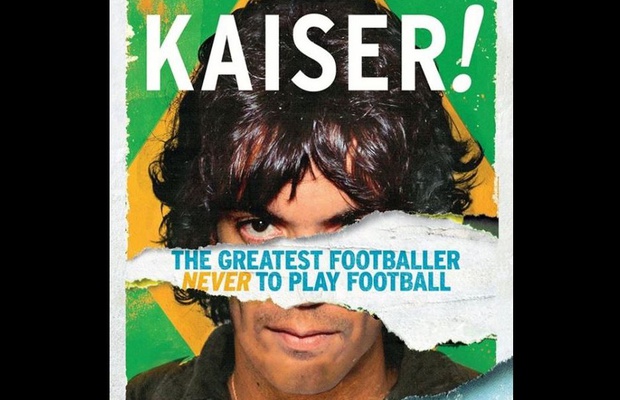 Kaiser, a documentary feature part-scored by Eclectic Music, is to receive a nationwide cinema release in the UK.
The fascinating documentary, directed by Louis Myles, tells the unbelievable forgotten story of football’s greatest conman, Carlos Kaiser. Dubbed ‘the greatest footballer never to play football’, the Brazilian gained notoriety in the '80s and '90s for creating a career as a professional footballer – despite having zero intention of ever kicking a ball.
Incredibly, Kaiser managed to dupe Brazil’s most iconic clubs into hiring him for over two decades. A master manipulator, he masked his limited football ability by repeatedly faking injury - even fooling high society and dangerous gangsters while living the glamorous lifestyle of a football star. Now for the first time, this gripping new documentary - featuring the now 55-year-old Kaiser - unearths the astonishing truth.
Composers Smith & Elms of Eclectic Music created 35 minutes of composed music for the score to accompany the existing published Brazilian music. Aiming to match the high quality and authentic spirit of these tracks, Eclectic scoured early '70s Brazilian Funk and Pop compilations, sourced original Brazilian instruments such as panderios, caixas, cuícas, and surdos, and collaborated with London-based Brazilian vocalist Carolina Lins.
The Eclectic team also rerecorded Kaiser Chiefs’ noughties anthem ‘I Predict a Riot’ in a Brazilian style to complement the feature. Eclectic's version features in the official trailer.
Composer Colin Smith comments: “The story began with a meeting with Nick Hodgson, who wrote the song for Kaiser Chiefs. We thought it would be fun to make our version sound retro, as if it had been released before Kaiser Chiefs’ iconic tune. So, we took on the mission of adapting Indie Rock into 70s Brazilian Pop: we slowed down the tempo, found the right groove for the percussion, bass and guitars and then reharmonized the song to compliment the rest of the soundtrack. The lyrics too were brilliantly rewritten by director Louis Myles. A word for word translation did not work rhythmically, so instead some lines were translated to reflect the storyline - these new lyrics also involved some Brazilian vernacular, Kaiser’s name and Carioca slang.”
Composer Simon Elms adds: “This film was a fantastic project to work on for us at Eclectic, which all started after meeting Ian Neil, a very experienced music supervisor. It is a fascinating story and I think it will do well for everyone involved. There’s such a vast amount of interesting and diverse Brazilian music. We managed to learn a lot as well as enjoy the process of writing and producing. All in all, it was a complex but tremendously exciting month and a half.”
‘Kaiser’ launches at select cinemas in the UK from Thursday 26th July 2018. It first premiered at the Tribeca Film Festival.