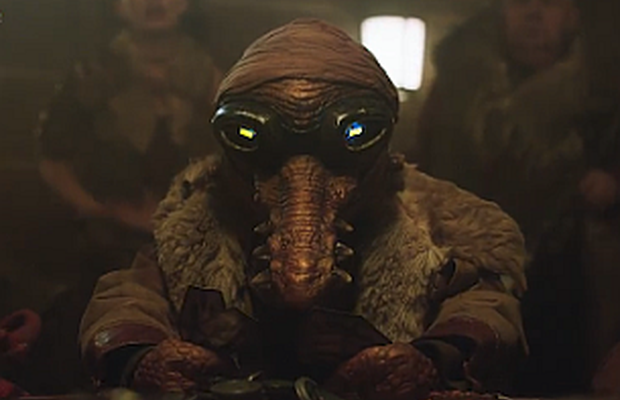 Thanks to Denny’s, America won’t have to travel to a galaxy far, far away to experience its own taste of “Solo: A Star Wars Story.”

Starting today, Star Wars fans and guests across the country will be able to get their hands on a variety of movie-inspired items, including a bold new menu and exclusive “Solo: A Star Wars Story” trading cards only available at Denny's--all while helping a great cause in the process.

Net proceeds from the sale of all trading card packs will benefit Denny’s longtime partner, No Kid Hungry, to help kick childhood hunger into outer space.

“We are thrilled to collaborate with the team at Lucasfilm and No Kid Hungry for the much-anticipated release of ‘Solo: A Star Wars Story,’” said John Dillon, marketing officer for Denny’s. “We’re incredibly excited to join forces and bring America an out-of-this-world campaign that will not only feed the excitement of every Star Wars fan and Denny’s guest, but will also do some good along the way by helping fight childhood hunger and raise awareness for this important mission.”

“Since 2011, we have been so proud to partner with Denny’s in the fight to end childhood hunger, and we are honored to be part of this unique promotion,” said Diana Hovey, senior vice president at No Kid Hungry. “Ending childhood hunger takes all of us working together, and we’re so grateful to have the support of both Denny’s and Lucasfilm. Denny’s has been a key partner of the No Kid Hungry campaign, and to date has helped connect kids in need to more than 63 million meals, proving that together we can truly end child hunger in the U.S.”

Each exclusive “Solo: A Star Wars Story” trading card pack, only available at Denny's in-store and via ‘Denny’s on Demand’, includes two of 12 different character cards, featuring Han Solo, Chewbacca, Qi’ra, Lando Calrissian and more, in addition to a Denny’s coupon for future use. A portion of all sales from the $3 trading card packs--with a minimum guaranteed donation of $1million--will be donated to No Kid Hungry to help provide meals to children in need.

To kick off the promotional campaign, Denny’s has released its own “Solo: A Star Wars Story”-inspired national TV spot, “Hand of Sabacc.” Set inside the lodge from “Solo: A Star Wars Story,” the spot features two young adversaries, who imagine that they are squared off in a high-stakes card game as characters from the Star Wars universe, including Chewbacca, watch from around the booth. Denny’s worked closely with Lucasfilm and Skywalker Sound and enlisted the help of acclaimed production designer Neil Lamont and Oscar-winning creature and Special Makeup Effects Supervisor Neal Scanlan--both of whom worked on Star Wars films “Rogue One: A Star Wars Story” and “Star Wars: The Force Awakens”--to create an authentic Star Wars environment for the spot.

Star Wars fans can also fuel up with their crew with Denny’s movie-inspired menu, featuring bold new items that will send guests’ taste buds into hyperdrive. Available 24/7, Denny’s new menu includes the Co-Reactor Pancakes, featuring fresh strawberries, strawberry sauce and whipped cream, plus a side of Crystal Crunch Rocks and a pitcher of warm citrus sauce to pour over the pancakes; the Blaster Fire Burger, which offers up chipotle gouda cheese, bacon and spicy Ghost Pepper sauce top a hand-pressed 100 percent beef patty; along with the new Two Moons Skillet and Denny’s Lightspeed Slam. Guests can also activate their taste buds by adding a side of Crystal Crunch rocks to their favourite Milk Shake.

If that wasn’t enough, guests can also enjoy their favourite beverage in one of Denny’s Limited Edition “Solo: A Star Wars Story” collector cups featuring characters from the film and topped with a Millennium Falcon lid.