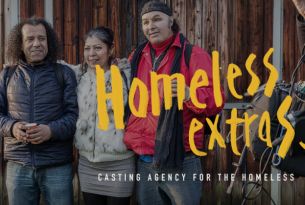 The agency approached De Volksbond with the idea, on the back of the insight that background actors – or extras - do not require formal training in order to forge a career. As a result the world’s first homeless extras agency was born. DDB & Tribal Worldwide, Amsterdam and De Volksbond passionately believe that working in this industry can help to raise money and boost confidence among the homeless. Together with production companies In Case Of Fire and Fono, DDB & Tribal Worldwide, Amsterdam successfully put the concept to the test.

With the help of DDB & Tribal Worldwide, Amsterdam, De Volksbond assembled a large group of homeless men and women from Amsterdam, who fit the role of extras in a, soon to be aired, commercial production.

Going forward, De Volksbond will fulfil the permanent role of casting agency for which the charity will receive half of the compensation an extra gets paid for the job, in order to help other homeless people in the country. The other half of the payment for each job goes directly to the homeless person employed. In this way, the initiative positively impacts homeless people in two ways: by subsidising support for the wider homeless community and, at the same time, empowering and paying the person who works in the production.

Ivo Roefs, CO-CEO, DDB & Tribal Worldwide, Amsterdam, commented: “The advertising industry all over the world has a huge need of extras and, one day, we got to thinking that this could be a brilliant way to support and build confidence among people who have hit hard times.  We have worked with De Volksbond in the Netherlands to bring this initiative to life and would love to see it being picked up all over the world to help people who need it most.”