DDB Latina Named Network of the Year at Wave Festival 2019 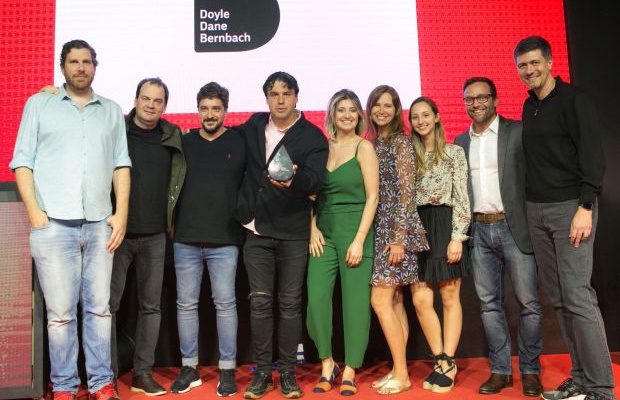 DDB Latina has once again been awarded Network of the Year, this time at the Wave Festival awards gala ceremony, celebrated last night in Rio de Janeiro in Brazil.
DDB Latina led the top creative networks of the region and two of its offices were named among the top three best agencies. Africa, as number one and named Agency of the Year, took home the Blue Wave Award which celebrates the best idea of the entire festival, along with two Grands Prix and three Golds for its world class campaign, TagWords for AB InBev’s Budweiser. Alma DDB that was also positioned in the top three as Multicultural Agency of the Year, won five impressive Golds, five Silvers, and two Bronzes. DDB Argentina took home two Silvers and SunsetDDB debuted with three Silvers.
The Wave is one of the most recognised creativity festivals in the region and it is organised by Brazilian advertising and marketing media company Meio & Mensagem since 2008.
“Creativity is in DDB’s DNA. It was shaped by such great agencies and people like Bill Bernbach, Keith Reinhard, and so many others that in order to exalt this DNA, we need to focus on creating the right environment for our team, where creativity can really flourish and grow,” says Sergio Gordilho, co-president and CCO of Africa.
After being last year’s number one agency in Latin America at Cannes Lions and El Ojo, recently the most awarded agency of the Latin America at the D&AD and the most awarded agency in Brazil by The One Show, being now named Agency of the Year at the Wave Festival proves that we are in the right path, respecting the legacy and the creativity foundation of one of the most creative groups in the world,” adds Gordilho.
“It’s a huge coup to be the third most awarded agency in the region. It’s a matter of pride that everyone of our submissions was awarded,” shares Luis Miguel Messianu, creative chairman – CEO at Alma DDB.
“We take great pride for this recognition. It’s fulfilling to see how our unique vision of Culture is reflected in the quality of our people and the work we create as a region. This result is especially important in today’s world facing the Creative Revolution where we have to combine data/technology and storytelling in such a way that generate important results,” says Juan Carlos Ortiz, CEO of DDB Latina.