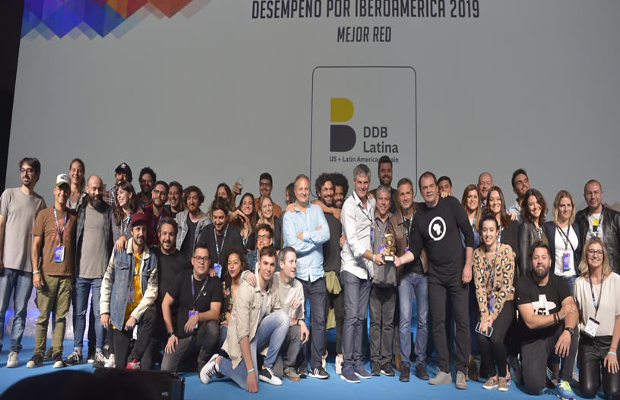 DDB Latina, DDB Worldwide’s division that unites the Latin markets of the world (US Multicultural, Latin America, and Spain) is named Network of the Year 2019 at El Ojo Festival.
Thirteen of its offices contributed to a total of 165 metals: 5 Grand Prix, 43 Golds, 53 Silvers, 64 Bronzes. Africa took home 2 Grand Prix, 1 in the category of Sustainable with #GoEqual and 1 more in Digital and Social with Pay per Beer for Budweiser, in addition to 14 Golds, 24 Silvers, and 32 Bronzes. DDB Spain was awarded one Grand Prix with Heroes of Today, adding to 12 Golds, 5 Silvers, and 3 Bronzes. Meanwhile, Fahrenheit DDB Peru won one Grand Prix in Brand Experience with Perussian along with 10 Golds, 4 Silvers, and 2 Bronzes. Argentina, Colombia, Alma DDB in Miami, Puerto Rico, Mexico, Guatemala, Sunset, Tribal Brazil, Tribal Peru, and Tracylocke Brasil, in the list of winners of El Ojo for the first time, were all the offices that contributed to the exiting results.
Africa Brazil was named Best Agency of Ibero-America and Brazil. On the other hand, Africa, DDB Centro Guatemala, DDB Colombia, Fahrenheit DDB Peru and DDB Latina Puerto Rico, were established as the Best Agencies in their country, and Sergio Gordilho was recognised as the Best Creative in Latin America and Brazil. Victor Pardo, Julian Nuñez, Andre Pedroso, Ricardo Chadwick, Sergio Franco and Enrique Renta, as Best Creatives in their respective markets.
DDB Colombia, Fahrenheit DDB Peru, and Puerto Rico won the Best Local Idea with Banco de la Amistad for AB-InBev, Perussian Prices, and Calma for Medalla Light, respectively.
The most awarded pieces of DDB Latina were Pay per Beer for Budweiser and #GoEqual for Go Equal by Africa, Heroes of Today for LaLiga by DDB Spain, and Perussian Prices by Fahrenheit DDB Peru for Peruvian Supermarkets.
DDB Latina meets three times a year with the creative leaders from the region to review in detail and evaluate the ideas they present to their clients, with the purpose of improving and bringing each of the best ideas produced by their agencies to the highest level of quality. This process is called the Bullseye system.
“We are proud to celebrate the team results that confirm that Creativity is and will be the reason for our business. The creative evaluation system we call Bullseye has allowed us to join efforts as a Network to raise the quality of our creative product and become the Most Creative Network in Latin America.” shares Juan Carlos Ortiz, president of DDB Latina.