Cannes Contenders: The Work to Watch from FCB

A movement to get ‘dyslexic thinking’ considered as a skill, reuniting separated families through clever AR and a study into exercise-based therapies for people with Down syndrome all feature 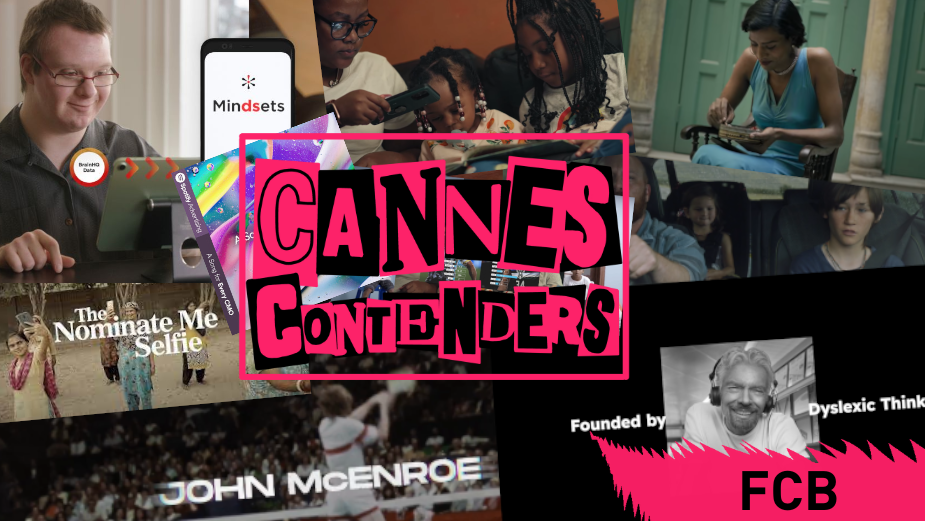 Agencies from across the FCB network have created a variety of ingenious, thrilling and worthwhile campaigns – and it’s come to the time of the year when they find out what their peers in the advertising industry thought of it. With the first in-person Cannes Lions for three years just days away now, we’ve asked senior professionals from the network to share their favourite projects from the network – and to show us what to expect from their agencies at this year’s festival.
LBB has asked every major agency network to share its best work from the past year ahead of Cannes Lions 2022. Check out all the lists published so far here.

FCB New York co-chief creative officer Gabriel Schmitt: “We had the idea that if someone who was not perceived to have enjoyed their journey could have another chance, what would that look like? One thing led to another, and we came to the idea of John McEnroe facing himself. He was a natural choice; a brilliant player, but not necessarily a joyful one. We thought it would be amazing for viewers to see him going through the experience, and a super effective way of conveying the brand’s distinct point of view.”
Idea Creation: FCB New York

FCB New Zealand ECDs Leisa Wall & Peter Vegas: “In New Zealand we refer to the people killed in crashes as our 'road toll', as if their lives are the price we're willing to pay to use our roads. We wanted to disrupt that mindset and launch 'Road To Zero', a bold plan to reach zero deaths on NZ roads by 2050.”
Idea Creation: FCB New Zealand

FCB Inferno CCO Owen Lee: “Great advertising should stir emotion and create action. Our work with Virgin to get dyslexic thinking listed as an official skill on LinkedIn not only captured the brand’s mission to continually challenge the status quo, but it also created an outpouring of emotion from people who had hidden their dyslexia, including close friends of mine.”
Idea Creation: FCB Inferno

Political Shakti, The Times of India – The Nominate Me Selfie

FCB India creative chairperson Swati Bhattacharya: “If you look at it globally, the work that comes out of FCB is all about pushing society in the right direction. So, we don’t want people to just buy brands, we want them to believe in brands. That is why we sometimes use our agency not just to do the work but to even move the campaign. Like in this case, FCB made the Political Shakti and TOI collaboration happen.”
Idea Creation: FCB India

FCB India creative chairperson Swati Bhattacharya: “In India, children usually have a box which they use to store their most precious possessions. In the case of trans children, however, they need to hide their box of treasures, since some of their most precious possessions don’t fit the gender norm that society expects them to conform to. Unbox Me shows exactly that, every box opened revealed someone’s true self. We sent these boxes to prominent people in the community, who then unboxed them on their social media feeds, sharing their feelings and thoughts as the reality of countless children suppressing their spirit became a tangible reality one could experience.”
Idea Creation: FCB India & FCB Chicago

FCB Chicago CCO Andrés Ordóñez: “The idea is simple, incarcerated parents recording audio of a book so that their children at home can follow along. But the AR-enabled technology that supports the program is impressive and complex. It was the key to seamlessly bringing families together so they can enjoy a special moment that so many of us reflect on from our childhood, a bedtime story with our parents.”
Idea Creation: FCB Chicago

Band Network – Fans Will Be Fans

FCB/SIX managing director Juliana Nascimento: "We impacted fans individually with hyper-segmented ads related to the content they were consuming at that moment. We connected penalty conversion rates to free throw percentages, linked the league's top scorers to the season's point leaders, and found similarities even among long-distance shots, generating new ads at the end of each round."
Idea Creation: FCB Brasil

Spotify – A Song for Every CMO

FCB New York co-chief creative officer Michael Aimette: “It’s a big miss when we just treat audio as radio. ‘A Song For Every CMO’ is trying to show marketers how fun and effective the platform can be, how their message can be so tailored to one’s audience, and how it can bridge music and creativity in new ways.”
Idea Creation: FCB New York

FCB chief creative officer Nancy Crimi-Lamanna: “We decided early on to tackle fitness as the focus of this year’s brief, and we were in concept development when we saw the story of Chris Nikic and his father, Nik. It led us to wonder if this incredible story could have farther reaching implications and be proven throughout the community. As the idea came to life and we approached our partners at Anglia Ruskin University and BrainHQ, we realised that a study of this magnitude had never been attempted, and that’s when we and our partners got really excited. Not only is it ground-breaking, but it has the power to create true and lasting change. ‘Mindsets’ has the potential to impact the lives of our Down syndrome communities and their families around the world.”
Idea Creation: FCB Canada
view more - Creative

News from FCB US

Work from FCB US