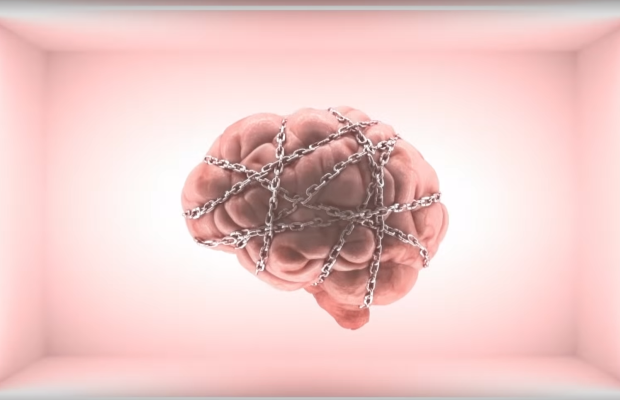 Spoiler warning – watch the video cold before reading what they’ve got to say about it!

It takes a few watches to start unpicking the video, and what emerges is an image of a lost middle-aged man. I ask them if this hyperactive anxiety is supposed to be a surrealist depiction of a midlife crisis.
No, as it turns out. At least, not intentionally. The mysterious trio created the video as an attempt to visually depict the experience of stroke victims. They pored over numerous testimonies, and about three quarters happened to be from heterosexual white males who were over 50 years old.
“The visions that arise from these experiences all have in common the neuroses of this category of the population: identity disorder; existential anxieties linked to erection problems; transfer phenomenon to a more sporty image of the father; burning desire for extreme but playful activities such as motocross or solo rock climbing...,” they reflect.
While the first watch is a visceral whoosh, the promo gets more rewarding on each subsequent re-watch. For example, the various characters and monsters in the video are all the same character. He’s watching as the stroke pulls him in different directions. “[He] observes himself evolving in different psychic configurations. He has big eyebrows, like a muppet, and the physique of a life insurance customer advisor,” explain the team. “For us, it was a way to physically embody this subtle mix of magic and everyday life, within which we navigate throughout our existence and which nourishes the aspirations of each and every one of us.”
This middle-aged man confronting himself and his fears following a stroke is not, I think we can all agree, an obvious topic for a music video. Of any genre, really, but especially not the frenetic speed of a track like Very Noise.
Meat Dept, though, were given a fairly free reign. When the band first got in touch, Meat Dept was working on an exhibition of ‘living paintings’, perfectly looped animations. The initial idea was to create a single, hypnotic loop for Igorrr. But as they listened to the track, they couldn’t escape its underlying violence and disturbance.
As chance would have it, they’d also been playing about trying to ‘bug’ a character for a test. The result was what they call the ‘chewing gum man’ in the boxing ring. “We played the song and it turned out that the two were made for each other,” they recall.
That loop turned into a video as they began to build more images onto it – Meat Dept describe the experience of unfurling the video as an ‘exquisite corpse’. There was no script or storyboard. They created images without filters and plunge into a true stream of consciousness. It’s unsurprising to learn that since the video launched ten days ago, the directors have received a few messages from psychoanalysts who have found the video to be rich pickings.
From a technical perspective, Very Noise also gave them the creative latitude to test tools and techniques, pushing the software the use to the limit and beyond. “[These are] things that animators are not allowed to do in regular studios and which, however, are an important source of creativity.”
“The technology, tools and techniques play a crucial role in our process,” they explain. “Every project we have initiated has been driven by the excitement of playing with a new technology. It’s not that much about what is expressed, but the expression itself with this new medium.”
After Very Noise, it’s easy to get sucked into Meat Dept’s shuddering, juddering world, that takes hyperreal CG and smashes it up with surrealism. While most CG animators are keen to escape the Uncanny Valley, this lot positively roll around in it. It’s their playground. It’s their lab. And while they’re not keen to describe or label their work, what they will say is “we try to create life from our machines.”
But to get caught up in the aesthetics and the technology is to lose sight of what makes Meat Dept’s work really resonant. It’s very, very silly. The threesome revel in it – even in a topic like the horrors of experiencing a stroke they find a dark, relatable humour. After all, as they say, there are two ‘creative mammaries’ feeding their work. One is tech but what really breathes life into their digital creations is the silliness.
“We love human stupidity; it’s everywhere, and it’s a beautiful flower demanding to be plucked and admired. There is joy in accepting one’s stupidity and that of others… Especially that of others. And to portray it with benevolence can be very liberating.”