Before We Throw the Joker out of Court…

INFLUENCER: Illustrator and animator, Dave Anderson, reveals why humour and jokes are like bird-watching 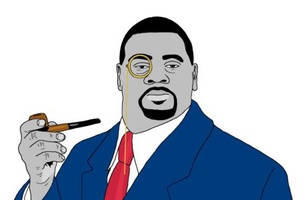 When I was at art school, I made one animation. Badly drawn on a WHSmith notepad, it was of a small naked man pelvic-thrusting in time to the national anthem. It was selected for the Jerwood Drawing Prize. At the award ceremony one of the judges sidled up and said “it's good to have a bit of light relief sometimes”. I was inspired, and 14 years on, I’m still working on the funny.
Humour can do much more than simply ease tension and give comfort: it’s a powerful and often underrated tool in your arsenal. If you’re sceptical, consider the social science behind it from professor Scott Barry Kaufman: “When you have little else to go on…[using] humour in a clever and original way…signal[s] quite a lot of information, including intelligence, creativity, and even aspects…such as playfulness and openness to experience.” (familiar buzzwords probably burnt onto every agency whiteboard...)
I know I wouldn't be the first to point out that we're not living in particularly funny times. Twitter outrage makes everyone very nervous and besides, the priority these days seems to be finding clever new ways of building numbers on social media. But here I want to make a case for comedy, before it's banned altogether…
A humorous approach absolutely does not mean you are not confronting a difficult problem
When we’re working off a serious brief or topic, more often than not, we veer towards an inspirational or heart-breaking tone. But humour is an excellent way of acknowledging pain, common to everyone, without the isolating feelings of guilt and shame. It unifies us with our tribe. It's very hard to feel alone while laughing.
People (and particularly the unfunny) often fearfully mistake the joker as either aggressive, deceitful or an idiot. And when the joker is thrown out of court we then open ourselves to all sorts of fresh tyranny.
I’ve been lucky enough to be involved in successful campaigns that have used humour in a smart way to approach serious subjects, such as cancer and depression. One particular campaign was a set of Valentines cards for national disability charity, Scope. The 'Kiss the Awkward Goodbye' project reminded people that romance is still a part of life for those with disabilities, the cards having such slogans as ‘I Love You (and it’s not just the free parking...)’, ‘I’m Head Over Wheels With You...’, ‘Sign Sweet Nothings To Me’, and ‘Get your Cane, You’ve Pulled.’ The path of least resistance and risk this was not. But its bravery showed that comedy can give people, perhaps previously patronised, a real sense of strength and control.
Everyone is funny
Jokes are like birdwatching, training your brain to spot them, rather than conjuring them up from thin air. As long as you're making personal slip-ups, ridiculous misunderstandings and crap puns, you are helplessly hilarious. The only difference between those people and the ones that work in comedy is that the ones working in comedy write that stuff down.
At risk of showing you behind the curtain, for the past fifteen years I've been noting, at first on scraps of paper, and now these days into my phone, every peculiar thought, funny overheard line, or unusual mishap. And this is where it gets less funny: I then categorise the notes under a range of twenty or so subjects (habits, TV, music, history etc.), ready so that if someone should ask for ten jokes about salad, then boom, you got it. If I don't write an idea down, five minutes later it usually slips away for good and I grieve as if at the death of a pet.
On a more personal note, it'll save your sanity
After art college, I did an ‘unofficial residency’ at an ad agency. I met everybody in the building, making many friends and with no permanent job to lose, got a very interesting 'outsider's point of view' of the industry. Often the details discussed, or the products themselves, were so laughably mundane that there was an unmistakable whiff of ridiculousness in the air. I remember one senior creative, bag over the shoulder at the end of a long, stressful day of meetings and intense planning, whispering to me with a smile, “It doesn't really matter, does it?”
People can do strange things in an intense social atmosphere, so it might save your sanity to avoid taking yourself, or indeed the brand of toothpaste in question, too seriously.
Dave Anderson is represented by HU_SH in the UK. A D&AD winner and former stand-up comedian, he helps even the most uptight organisation find their funny bone – bringing his humour to the likes of Cancer Research UK, Jacamo, Nike, Esquire, The Players’ Tribune, and collaborating with Tom Rosenthal. Dave is now based in Barcelona after five-years of living and working from Lima, Peru. Having acclimated to lovely, loopy Lima’s symphony of traffic and drilling, he still has to play YouTube videos of car alarms at night so he can drift off to sleep…

A Big Mac and a Tub of Ben & Jerry’s: Cris Wiegandt’s Creative Order

Who Are the Nerdo-s Taking On Mafia, Dragons, and Trippy Visuals?