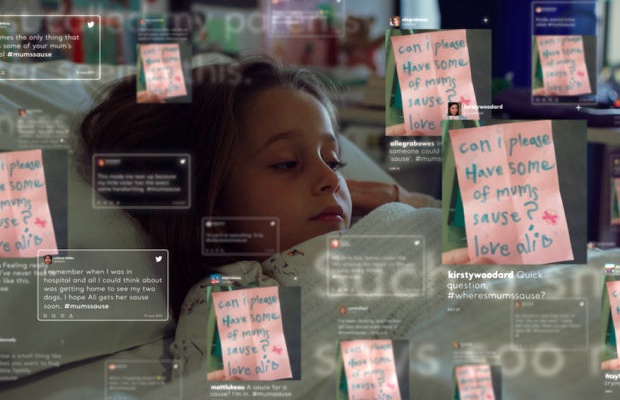 A new national fundraising initiative ‘Curing Homesickness,’ created by Sydney Children’s Hospitals Foundation (SCHF) and advertising agency, CHE Proximity has launched. In an Australian first, Curing Homesickness will see children’s hospitals from across Australia raise funds together alongside A-list celebrities and brands like Coles, The Walt Disney Company Australia and New Zealand, Assembly Label, Pasta Pantry, NRL, and eBay. Money raised will fund equipment, care and research to get kids home from hospital sooner.
Curing Homesickness launches with a movement called 'Mum’s Sause.' The film is about a young girl in hospital named Ali, who despite all she’s going through, misses her mum’s pasta “Sause”. The film follows the story of how her brother spots a handwritten note from Ali who has misspelt the word ‘sauce’. The note becomes a social post, a social post becomes an internet sensation, and 'Mum’s Sause' becomes a symbol that unites brands, celebrities and the community to cure homesickness. Ali’s story isn’t real, but homesickness is, as the story represents the hundreds of thousands of kids in Australian hospitals every year.
The film features Australian celebrity cameos from Rose Byrne, Lee Lin Chin, Hamish Blake, G Flip, Mia Freedman and news presenters from Channel 9 and 10. Other celebrities have also joined the mission including Nicole Kidman and NRL sports teams, who have all rallied around the cause to help raise awareness for the movement. Demonstrating the power of social media, it is hoped that life will imitate art with all of Australia helping spread the message about curing homesickness.
Says Nicola Stokes, CEO, Sydney Children’s Hospitals Foundation: “We know that kids get homesick when they are in hospital, but homesickness isn’t always recognised as a serious complication or illness, and this is the first time it has been the focus of a fundraising campaign to address it.
“We developed the idea because our Foundation was exploring how we could make more of a difference to the emotional wellbeing of sick kids, as well as raising funds for vital equipment, ground-breaking research and excellent clinical care. When I shared our idea with colleagues at other hospital foundations across Australia, they wanted to be involved and they immediately offered to collaborate with us to deliver national impact for every child and every community.”
Homesickness is the distress or impairment caused by separation from home and severe homesickness in children can lead to social and behavioural problems, anxiety and coping issues, and feelings of helplessness. Studies show that severe homesickness symptoms actually worsen in children the longer they are away from home. The cure for homesickness is home.
50% of hospitalised children suffer from moderate to severe levels of homesickness. By shifting the focus from the medical condition to addressing homesickness (emotional wellbeing), it provides a single-minded approach to fundraising that can unite all hospitals to unlock new donations. No matter the illness, injury and ailment these kids come in with, Homesickness is something they all share. If Australia can rally together and cure it, the hospitals are well on the way to beating any sickness, and getting kids home where they belong. 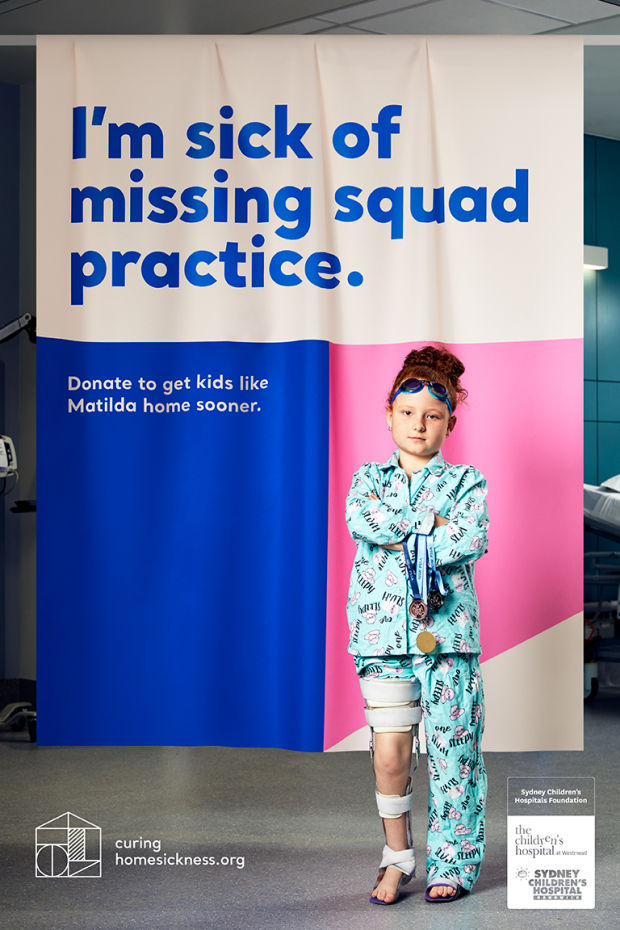 Says David Halter, chief strategy officer at CHE Proximity: “This project started two years ago with a request from Nicola and the board to help increase donations. During our hospital visits, we noticed a simple insight: Kids who are in hospital for a particular sickness also have another sickness that Australians are currently unaware of – homesickness.”
Says Ant White, chief creative officer at CHE Proximity: “Mum’s Sause is designed to not only be part of culture but inject itself into it. We are purposely blurring the line between reality and fiction. Apart from Ali and her family, who are based on the stories of millions of Aussie families, everything in the film is real – Coles made Mum’s Sause, Assembly Label printed tees, Disney are hosting special screenings, Pasta Pantry are donating parts of their menu, eBay are contributing in a big way too. These are just some of the ways people can become part of the story. Even the influencers, newsreaders and journalists in the film will be posting, sharing and airing content today mirroring the story.
“People want to be part of good stories today. It’s a form of social currency. We wanted to create a movement that allowed people to join in, and make a real difference, not just a campaign that pulls at the heartstrings. But we’re sure it will do that too.”
By raising money to tackle homesickness head on for the first time, the Curing Homesickness initiative will be helping every child in our partner hospitals, ensuring the very best equipment, research and services are available to get them back home sooner.

Corporate Partners
Coles have made 'Mum’s Sause' a reality, creating a pasta sauce with a Health Star Rating of 4. Jars of Coles Mum’s Sause are now available to buy and will be stocked in more than 800 stores across Australia. 50 cents from every jar go to Curing Homesickness Mum’s Sause Bolognese which contains no added sugar and no artificial colours.
Says Lisa Ronson, chief marketing officer of Coles: “As soon as we heard about the Curing Homesickness initiative, the ‘Mum’s Sause’ idea, and that we could make a real difference to children’s lives we knew we just had to be a part of the launch. There are so many things that children in hospital miss from home, but it’s often the simple pleasures like mum or dad’s home-cooking that matter most. That is why Coles is so honoured that we have been able to put a product on our shelves that is not only good for you, but is also doing good for kids around the country.”
Disney’s Marvel Studios Avengers: Infinity War and Endgame back-to-back sessions will be held across Australia on Sat Aug 3rd at select Event and Village cinemas. 100% of ticket sales will be donated to the hospitals.
Locations include:
● NSW: Event Cinemas George Street
● QLD: Event Cinemas Chermside
● SA: Event Cinemas Marion
● WA: Event Cinemas Innaloo
● VIC: Village Cinemas Jam Factory
Assembly Label has released an exclusive and limited-edition range of ‘Homesick’ t-shirts for men, women and children available in-store and online, with all proceeds going towards Curing Homesickness. Pasta Pantry’s Sydney stores are raising awareness and donating funds from the sale of their flagship pasta and lasagne dishes in support of the Curing Homesickness initiative.
The activity is supported by a heavy PR presence and donated TV, cinema, outdoor, and digital all reminding Australians how kids in hospital are also homesick.
CHE Proximity worked with all brands and media partners including Network Nine, Network Seven, ARN, Nova, MCN, Verizon, NewsCorp, oOh!, QMS and JCDecaux, to secure donated media space. Other elements of the launch include a 30” and 15” cut downs and a social, PR and influencer campaign.
Donations
Money raised will help fund critical medical equipment and technology, research, support programs to distract and entertain kids in hospital, enhance hospital wards and rooms and more. It will also be used to help cure homesickness in kids in hospital by creating a home-like environment within hospitals, developing services to connect kids to home or support programs to distract, entertain and engage kids during their stay.
Hospitals
Children’s hospital charities across Australia have joined the movement, including:
● ACT: Canberra Hospital Foundation for the Centenary Hospital for Women & Children Hospital
● NSW: Sydney Children’s Hospitals Foundation for The Children’s Hospital at Westmead and Sydney Children’s Hospital, Randwick
● QLD: The Prince Charles Hospital Foundation
● SA + NT: Women’s and Children’s Hospital Foundation
● TAS: Royal Hobart Hospital
● VIC: Monash Health Foundation for Monash Children’s Hospital
● WA: Perth Children’s Hospital Foundation
To get involved and donate online, please visit CuringHomesickness.org.
Follow on:
Instagram: @curinghomesickness
Facebook: /CuringHomesickness
Twitter: @CHomesickness
Use the hashtag: #CuringHomesickness