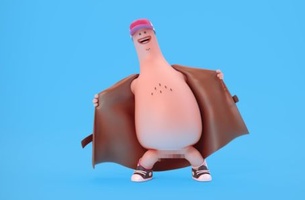 Creative studio Feed Me Light has been commissioned by dating service TrueView to produce a series of animated shorts, dubbed The Undateable Suspects, to promote their new safer dating app.

The overall creative is driven by the idea that with online dating, there can often be a significant difference between the online profile and the real-life character. Billy Bad Chat, Six Pack Stu, Two Faced Tony - these characters are all too familiar to anyone who has online dated. The client approached Feed Me Light with a set of characters that had been created based on real research on the dangerous individuals you encounter in the pursuit of love. The final product would be a series of promotional shorts based on each character and a composite piece that included all six horrifying individuals, for a wide range of distribution across online, social and print channels.

The six animated shorts will focus on the stories of the six characters that represent the types of questionable individuals TrueView’s  research has shown people are likely to encounter, or are afraid of encountering whilst dating online.

TrueView, due for a full launch later this month, is a new dating app that bases its brand around the core message  ‘dating that you can trust’. The app will include a feature called Trust Score Verification that the developers hope will greatly increase the security of online dating. Genuine users can link their online profile to various sources including social media, their bank or building society, and the electoral role. Once these sources are confirmed the accounts will be verified. The App will be available on IOS and Android, and will be free to download.

Marc Bouyer, director for the piece, remarked: "With this project we had to go straight to the point to try and nail down the bad clichés of the dating game right away. Designing them was the best part. Hopefully the result of our work won't bring back PTSD to some vets of the dating game!"

Matt Verity, TrueView founder explained: "From the moment I sat down to chat the brief through with the Feed Me Light team there was a level of enthusiasm and passion that I feel is becoming rare. The whole process was so enjoyable and even last minute feedback was dealt with professionally, quickly and efficiently.  Sometimes you can feel a little apprehensive about passing a creative idea over to someone else to execute. It can sometimes feel very difficult to align your thoughts and feel comfortable with the path that your idea is taking. Not with this lot. I felt like I was being carried along on a big friendly (3D of course) cloud.”

More from Feed Me Light

How Feed Me Light Brought Santa's House to Life for Dobbies

Gorillaz and G-Shock Blast Off on an Intergalactic Voyage

Getting to Know Effie Pappa