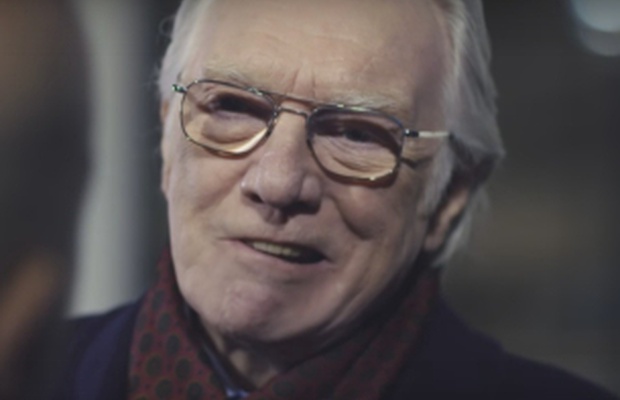 PSONA & SALT.TV have created a campaign to ‘get shirty’ with company bosses who don’t let their staff get involved in Football Shirt Friday – the Bobby Moore Fund’s nationwide event to raise money for bowel cancer research.

The agency has called on a celebrity cast led by Snatch hard-man actor Alan Ford, comedian Omid Djalili, bodybuilding AFC Wimbledon star Adebayo ‘The Beast’ Akinfenwa and various England football legends, to create a series of films, which are being seeded on social media platforms and blogs.

The main film opens with a despondent Djalili seeking inspiration from Bobby Moore’s statue outside Wembley Stadium. Ford emerges from behind the monument and begins a typically impassioned and ‘shirty’ rant about the need to coerce CEOs and HR managers into allowing their staff to wear football shirts to work on April 22nd.

Viewers are then encouraged to register their support and if their boss isn’t playing ball, they can be sent a personal video message from Ford to help change their minds. Like he says, “It’s better to wear a football shirt to work than a block of concrete at the bottom of the Thames.”

Once people have signed up and donated £2 to the Bobby Moore Fund to wear their club colours to work, they receive a thank you video from ex-England and Arsenal goalie David Seaman.

The campaign is being amplified across a fully integrated marketing mix, featuring the stars of the campaign and real company bosses in sticky situations. The idea is also being executed through social media channels (primarily YouTube), outdoor media, digital display and email.

Jamie Bell, executive creative director at PSONA, said: “As an agency we recognise that brands don’t matter until they do things that make them matter. With this campaign we have made Football Shirt Friday matter by pointing out to company bosses how they are slowing down the fight against bowel cancer over something as trivial as an office dress code. The campaign was huge fun to make and our celeb cast gave up an enormous amount of their own time to help us show bowel cancer the red card.”

Stephanie Moore, Bobby’s widow and founder of the Bobby Moore Fund, added: “We had amazing support from the cast and crew. The film is genuinely funny and I’m certain it will drum up interest across the country. We’re very grateful to everyone who helped out and hope it will inspire people to wear their football shirt and donate £2 on Friday 22nd April.”

Everyone Is Welcome to the Electric Future in EDF's Environmental Ad