A New Kind of Army 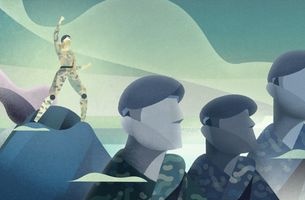 Hearing the word 'army' tends to evoke imagery right out of Rambo (or Cobra, or The Expendables, let's just go with Sylvester Stallone). When we were approached with an opportunity to create animations for several stories taken from the lives of real British Army soldiers, we knew we were signing on for something special. Karmarama came to us with authentic narratives captured from interviews with a few soldiers and asked us to deliver five animated recruitment videos that offered an experience true to the lives of British Army enlistees.

As we listened to the soldiers talk about serving in their own words we realised our campaign was not going to be anything like the visions of Rambo that may have come to mind when thinking about traditional army recruitment. Instead we heard soldiers reflecting on what it means to truly belong given that many come from unique backgrounds prior to joining the army. Issues including emotions, religion, sexuality and gender needed to be represented in compelling, compassionate animations. So much for the guns, bombs and blood traditional warmongers have come to expect.

We utilised a mix of several styles of animation in a versatile approach to creating visuals to accompany the voiceovers. All five of the videos were directed by brilliant Art Directors Juliet Park and Heather Lynn-Aquino. They sensed this project could be polarising because the British Army wanted to outreach to a new generation, one not too keen on perpetuating stereotypes. The team also included Jazeel Gayle as Lead Producer and Brien Holman as Executive Creative Director.

Sexuality (LGBTQ) - This is the only black & white spot and the tones show the contrast of being closeted versus being out in the open. The beginning shows the soldier’s aspiration reflected in his shadow. In the doorway, he transitions from aspiration to realisation. Later, he is pulled out of the shadows by another soldier, into the light of belonging. The imagery and colour tones allowed us to tell this story without using a stereotypical rainbow.

Gender (Listen) - The contrast of blue and pink gives way to a blue and green palette as the video progresses. The tone goes from dark to light, in all of the videos but especially this version. The idea of being listened to is shown using relative scale in relation to a character’s size and position in the foreground or background. As the narration progresses, she goes from small enough to fit in the palm of one's hand to standing tall, a head and shoulders above males of larger size.

Faith (Islam) - This was the first completed spot and it tested well with real soldiers. The main concept of faith was symbolised by the sun as a key figure. This can be observed by looking at how well lit a frame is, showing the time of day and when to pray. Light and shadow, the sundial, and the man at the desk blocking the light are all plays on the sun-as-a-symbol-of-faith metaphor.

Emotions (Crying) - In this spot, the frames show infusions of emotions as very real things that are depicted with double exposure. Tears of sorrow turn to tears of joy. Emotions mix from the inside out and the images do too. This spot had more of a cinematic feel and used water imagery in mainly blues and greens to get its point across.

Emotions (Superhero) - This spot begins as a nightmare of being intimidated, or quite literally being swallowed alive. Various shades of red with dramatic angles, extreme perspective and contrasting scale are employed in the first half, giving way to a more inspiring view (greens and browns) of getting physically fit and fitting in.

The recruiting effort shows a more diverse outreach strategy and publications have taken notice and the reception has been mixed. Outlets like CNN, The Drum and BBC News have expressed that the ads are meant to appeal to a broader audience than the traditional 18-25 white male demographic.

The initial backlash focused mainly on how far removed the spots are from actual combat. While some may long for the glory days, this campaign has been called “groundbreaking” by Stash Media and “a stroke of genius” by The Conversation. Apparently we can’t please everyone but from the looks of it the British Army got what they were looking for. Mission accomplished.

Production Company: We Are Royale

More from We Are Royale

We Are Royale Adds Chad Howitt as Creative Director to Staff

The Reality Complex: The Attention Economy

The Reality Complex: Creating for an Augmented World

The Reality Complex: Our Connected Culture