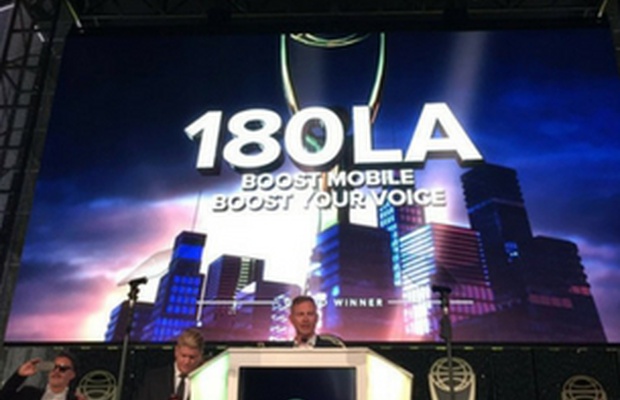 180LA won a Grand Clio in Direct, five Gold and one Silver Clio at the 2017 Clio Awards for Boost Mobile’s “Boost Your Voice” campaign, a non-partisan initiative that turned Boost Mobile retail stores into voting stations during the 2016 U.S. presidential election.
“We’re honored that our work with Boost Mobile has been recognized by the Clios,” said William Gelner, chief creative officer of 180LA. “We reimagined a retail footprint as a vehicle for good and gave underserved communities the opportunity to exercise their most fundamental right as an American, the right to vote. We couldn't be more proud.”
“Boost Your Voice” took a stand against voter inequality, giving disadvantaged communities the ability to “boost” their voices during the election. Recognizing the fact that residents of low-income neighborhoods have fewer voting stations available, Boost Mobile and 180LA worked with election officials to turn stores into official voting stations for Election Day.
To put a spotlight on the issue, 180LA partnered with voting rights groups, election officials and hip-hop artists Chance the Rapper and Murs to host get-out-the-vote events. The agency created a mobile-friendly web site that featured a polling place locator, shareable facts and a film about the problem of voter inequality and the limited access underserved communities have to voting locations.
Boost Mobile is committed to this issue and many of the mobile provider’s stores will continue to serve as official voting stations in future elections. “Change doesn't happen overnight,” said Peiti Feng, director of brand marketing and marketing communications at Boost Mobile. “We are going to continue to push for solutions to make this a meaningful long-term transformation.”
180LA earned a total of eight Clios on the night, adding a Bronze award for UNICEF’s “Unfairy Tales – Ali,” a streaming audio public service announcement that told the story of a Somalian boy and his family who fled their country after an extremist army tried to force him to join their ranks.
“It is very encouraging to see cause-related work embraced by brands and the advertising community,” added Gelner. “Our mission is to get the world talking about our clients and take action.”
The “Boost Your Voice” campaign earned seven Cannes Lions, including two Grand Prix, one Titanium, two Gold and two Silver at the 2017 Cannes Lions International Festival of Creativity, was named Campaign of the Year by Ad Age, and has been honored at numerous other industry awards shows.