The year in which advertising finds the religion of purpose, religion finds AI and Axe finds its magic 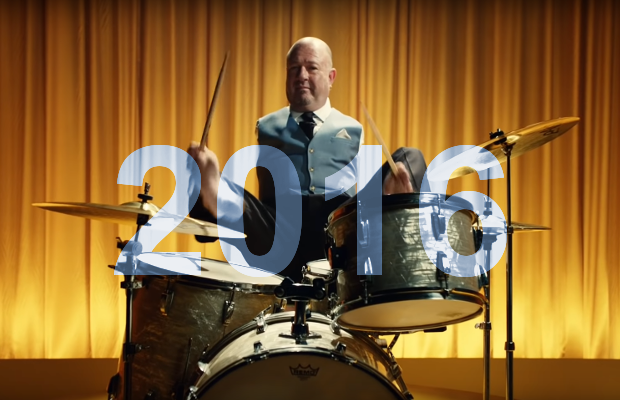 2016. The year it all changed. For ad industry Brits, many of us woke up on the Friday morning of Cannes Lions that year only to find our hangover was about to get much, much worse. Few had predicted that the United Kingdom would choose to Brexit, perhaps a sign that the coddled, largely London-based industry had lost touch with the country. And just five months later, the United States voted in Donald J. Trump as the powerful man in the world.
It was also a year of change in the advertising industry. Looking at our picks of 2016, we also saw a bit of a handbrake turn. Purpose and social good galloped ahead, and an industry so long enamoured with the ‘empowerment’ of women started to turn its attention to masculinity. The Paralympics also shone a light on the vast underrepresentation of disability in advertising – not that the industry has made any significant progress since, though later on in the decade we’d see much more focus on accessibility. As we whittled down this list there were a lot of social purpose projects to get through, believe us.
We also saw the industry enter the hyperventilation stage of the hype cycle as far as artificial intelligence is concerned, with a clutch of high-profile and playful AI-driven projects stoking our unrealistic expectations for the broader application of the technology. And for movie fans, we saw some feature directors bring a bit of flair to branded content films.

Have you met Graham? Of course you have. There was no avoiding Graham in 2016, such was the runaway PR explosion surrounding this campaign. Graham was the answer to the question: what would humans look like if they had evolved to survive road traffic accidents? His thick skull, in-built airbags and well-cushioned neck served as a disconcerting reminder of our frailty. The campaign was created by Clemenger BBDO in Melbourne and brought to life by Airbag, with help from an artist, a trauma surgeon and a crash investigator. And Graham also got his own copycat a couple of years later from the Melbourne Art Directors Club; Grant, designed to survive a career in advertising.

2016 was a surprisingly arty year when it came to breakout creative ideas. Though novelty Airbnb listings had been done before, the sheer delight of being able to spend a night ‘inside’ a painting was just irresistible. To publicise the Art Institute of Chicago’s Van Gogh exhibition, which saw the Dutch artist’s three ‘bedroom’ paintings reunited after 100 years, Leo Burnett Chicago recreated the famous blue-walled chamber. The museum saw a 250% spike in online ticket sales and the following year, 2017, the campaign took the Cannes Lion Gran Prix for Creative Effectiveness.

ING – The Next Rembrandt

From a Dutch pioneer to a Dutch master. Banking group ING has worked with JWT Amsterdam for several years to promote their support for Dutch arts and culture. In 2013,  they recreated Rembrandt’s famous The Night Watch by flash-mobbing a shopping mall. But in 2016, buoyed by the possibilities offered by burgeoning AI technology they did the unthinkable – created their very own ‘original’ Rembrandt. By analysing 346 Rembrandt paintings over 18th months and feeding a facial recognition AI with Rembrant’s techniques,they were able to not only create an image on screen, but 3D print it using 13 layers of ink in order to recreated the painter’s physical brushstrokes. It was featured in over 1400 articles and the agency claims the painting was responsible for a jump in stock value for both ING and Microsoft on launch day.

Yes I can! The Paralympics campaign from the UK’s Channel 4 was an act of unadulterated joy. From a craft perspective, it’s one of the best produced ads of the decade (don’t @ me). Direction, production design, music, editing… and of course casting. The ad is underpinned by a big band comprised of musicians with disabilities, fronted by Australian singer Tony Dee. The 4Creative team actually discovered Tony on YouTube. In an effort to progress the portrayal and representation of people with disabilities, the Dougal Wilson- directed spot has a lighter and more playful feel than previous years’ Paralympics outing. One in five people in the UK are disabled, so it’s an aspect of life that was vastly underrepresented in advertising and wider media and, sadly, nearly four years later that’s still the case.

Axe – or Lynx as it’s known in the UK – was known for three things. Its silly, sexy, and ‘90s lad mag ad campaigns. Being the deodorant of choice of fictional broadcaster Alan Partridge. And teenage boys spraying it compulsively in classrooms and common rooms as a form of olfactory terrorism. But in 2016, 72andSunny managed to reframe the lads-lads-lads brand as an empathetic big brother, helping pubescent boys find confidence and self-acceptance. It was one of the first brands to substantially rethink and reappraise masculinity, to align itself with changing attitudes among younger men and boys. And with director Francois Rousselet behind the camera, there's plenty of fun and swagger to be had and the spot resists the temptation to indulge in worthinesss. The campaign was a precursor to what became a fairly substantial trend in subsequent years.

Some WTF moments just stay with you and this lushly crafted tale of a father-turned-firefly is one such flash of silliness. Directed by Sato Wataru and created by Tokyo-based agency Drill Inc, there’s an irresistible warmth and tenderness to this ad that really serves to heighten the comedy of the final reveal.

In the autumn of 2016, Twitter’s online congregation started to find that their prayers-  or tweets – were being answered by the Pope himself. Ok. Not the Pope. A Pope. In order to promote the Canal+ show The Young Pope, starring Jude Law, BETC and production company Make Me Pulse used IBM Watson to create a bot that would analyse a million online comments and respond using an appropriate bible verse. It was a campaign that showed how AI and personalisation didn’t have to be joyless if deployed with enough creativity and divine inspiration. Over the course of two weeks, 4.5 million Tweets were analysed and 900,000 users were responded to – and the team claim that 2.6 million people met Robo-Pope… Talk about the opiate of the masses…

It’s time for a bit of Spike Jonze directing some crazy dancing now. I refer to this ad as ‘Weapon of Choice 2: Look Who’s Walken Now’, and I mean that entirely positively. In it, actress and dancer Margaret Qualley escapes a dull dinner to whirl unselfconsciously around a hotel lobby. And just as our heroine breaks free, the ad escapes the suffocating glamour and po-faced ‘sexiness’ that ruins most perfume advertising.

Wes Anderson presents his own candy toned and symmetrical take on the Christmas ad with H&M. Adrien Brody stars as a well-dressed train conductor who creates a festive party aboard his steam engine. With Anderson in the director’s chair on this campaign from agency adam&eveDDB, it’s a spot that avoids the usual emotional impact that British Christmas advertising has become known for it but it more than makes up for it with style and art direction.