Your Shot: How BETC Rebuilt LEGO’s World of Limitless Creativity 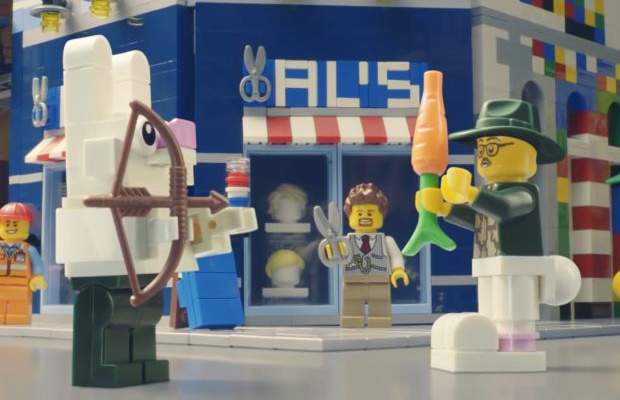 As someone who spent practically every Christmas Day of my childhood with plastic bricks strewn across the dining room table, I’ve been a brand advocate for the Danish toy brand for decades. I even worked at Legoland Windsor for one summer, before I found my career writing about advertising (I spent my days asking seven year olds who their favourite Jedi were in the Star Wars shop there - a pretty fun summer job).

So I was surprised to learn that until this week, I’d never seen a global brand campaign for LEGO. It’s the world’s largest toy manufacturer and yet there’s not been a single unifying brand message pushed out around the world since the ‘80s.

Now BETC Paris has delivered on the enviable brief of creating a message to help the world fall back in love with the Danish plastic brick system with its first global brand campaign for 30 years. And the resulting TV, online, OOH and DOOH ads the team has turned out, with the help of legendary Scandinavian directing collective TRAKTOR, are a total romp. Loaded with visual gags and more Easter eggs for LEGO fans than you can count, it’s a playful bonanza that reinforces all the personal warmth I feel towards the most important brand of my childhood.

I caught up with creative team Agnes Cavard and Valerie Chidlovsky as well as BETC executive vice president Dominique Verot for a brick-by-brick on the campaign...

LBB> What was the challenge that the client came to BETC with?

Dominique> The LEGO brand is amazing — it is extremely widely known and has a lasting legacy. Yet the LEGO brand needed to establish a stronger emotional connection with new families that have a strong affinity with creativity but do not connect with the LEGO System in Play. We wanted to invite the world to fall in love with the LEGO System in Play, giving a new, fun and fresh perspective on LEGO’s systemic creativity.

LBB> Why was now the right time to create LEGO's first global brand campaign in 30 years?

Dominique> Today, more than ever, people are expecting brands to stand for strong and meaningful values. Creativity is at the core of the LEGO System in Play and it has never mattered so much.

For today’s parents, cultivating their children’s creativity is very important as it is an essential skill that will help them grow and adapt to an ever-changing world.

Creativity is also empowering, enabling people to make a difference, offer a new perspective and have a positive impact; it has the power to change the world. That is exactly what the LEGO System in Play means: limitless creativity. Every child can build and rebuild without limits, imagining creative solutions, wild stories and new worlds.

LBB> Everyone has their own personal fond memories of LEGO. How did this impact on the strategy and idea as it came together?

Dominique> The LEGO legacy is an asset, yet we also wanted to connect with the families who didn’t have a strong bond with the LEGO brand. We wanted to talk to parents who have lost sight of the incredible creativity that playing with the LEGO System makes possible.

‘Rebuild the World’ is deeply rooted in the DNA and the experience of the LEGO System in Play and at the same time, it resonates powerfully with today’s parents — with their values, with what they consider as both essential and fun for their children.

The idea houses and mixes iconic references (which will delight the LEGO fans) together with more recent LEGO creations in an exhilarating display of unlimited, fun and inclusive creativity.

Check out images from the OOH campaign below:

LBB> It's clear that certain LEGO products fit the story of the campaign particularly well. What was the process of working out how to incorporate them all?

Dominique> All the elements displayed in the film are part of the LEGO System in Play. The choice of the different scenes in the film drove the products we display and vice versa. We had a story (the chase) and at the same time we were inspired by the prototypical LEGO items (ducks for instance) which we naturally integrated in the story. It was very important for us to play with iconic LEGO pieces — the bricks, the firemen, the builders — and to integrate the different worlds of more recent best sellers — for example, the cars, the police, the dragon.

During the process, we discussed the products we would feature and the selection of the different scenes with the client. The objective was not to display everything on offer, but rather to celebrate the infinite creative possibility of the LEGO System in Play.

LBB> The film has loads of visual gags in and all the OOH stuff is really funny. Apart from having a lot of fun writing these, what considerations do you have to make?

Agnes and Valerie> Humour is in the LEGO brand’s DNA. It’s impossible to imagine one of its brand campaigns without it. It’s a very particular type of humour; more psychological than just gags, a sort of naive and fresh irony. It is from this funny, creative, playful and touching tone that the world can be reconstructed. Every idea, every tongue in cheek visual grew and gave direction to the ‘Rebuild the World’ concept, moving it clearly towards the side of laughter and second-degree humour, far from exaggerations or the grandiloquent.

LBB> When it came to making the film, what did TRAKTOR bring to the process that most excited you?

Agnes and Valerie> TRAKTOR shares the LEGO spirit: high achieving with a perfectionism that is always paired with creativity and cutting humour. In the making of the action film or the surrealist music video, they preferred to use psychological humour. They set about defining the personalities of all of the characters, even if they only appeared for a few tenths of a second. They told a story that was both chaotic and fluid, with its own logic. This narrative approach felt right, as it is close to the way a child plays with mini figures and LEGO bricks.

You can check out an example of the campaign's DOOH below:

LBB> Can you talk about the process of getting the look of film right? It feels quite bold for the world not to be obviously built out of LEGO?

Agnes and Valerie> In fact, that is the very idea of the film. We are in the head of a child who tells stories that they transform into a reality when playing with their LEGO bricks. LEGO’s System of Play allows them to reconstruct the world exactly how they want to, with complete freedom and exceptional creativity. And we will discover that every part of the story was imagined by them using their LEGO pieces.

As far as craft is concerned, there are places, objects and real characters but imagined using a base of LEGO toys. This requires considerable work (casting, styling, hairdressing, accessories, finding suitable locations...) as well as post-production, which includes redesigning the entire city.

LBB> Are there any moments in the film that you particularly love or want people to notice?

Agnes and Valerie> Above all we want people to watch the film more than once in order to see all the amusing details and the countless Easter eggs, a new one popping up every second. It’s impossible to catch them all in the first viewing alone.

An example of detail: thanks to TRAKTOR’s initiative, there is a builder in each shot to symbolise the story in construction.

Easter egg example: three OOH posters are present in the film. Can you find them all? If not, we all still love the adorable little gasp of the rabbit when he thinks he’s done for!

Bouygues Telecom's Heartwarming Campaign Knows People are Made to be Together