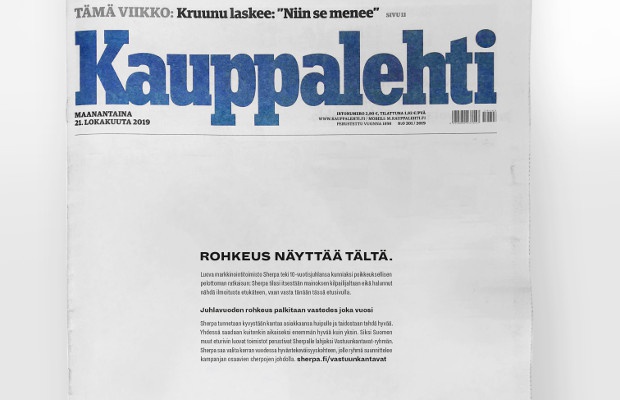 “Bravery is one of our principles,” says Tommi Kortesniemi, creative director and the founding partner of Sherpa. “If we want to do creative stuff bravery comes into the picture. We ask our clients to choose the boldest ideas.” So when the Helsinki agency decided to run an ad campaign for its creative services to celebrate its 10th anniversary, they knew they had to show, not tell, their boldness.
Inspired by the camaraderie of the Helsinki creative landscape, Tommi and his team landed on an idea to put the agency’s creative reputation in the hands of one of the city’s other leading ad agencies. Having written a good brief, they handed it over to TBWA\Helsinki.
That wasn’t enough though. So Sherpa reserved the front page of Kauppalehti, biggest finance newspaper in Finland and promised that TBWA could run the ad there without them seeing the creative as a client beforehand. “It felt interesting to get buzz around the ad even before it’s even published,” says Tommi.
Speaking before he’s seen TBWA’s creative, Tommi expresses his anticipation for it: “We are hoping that TBWA\Helsinki surprises us somehow. And from the discussions, I have gotten the feeling that they probably will. I’m sure creatives there have done a great job so I hope we get a bold execution that gets people talking about this campaign even more.”
Being entrusted with this responsibility by their peers and competitors was invigorating for the team at TBWA too. “Our creatives are used to adapting their thinking to fit various brands,” says Ville Ohtonen creative director and partner there. “But trying to view the world through the eyes of another agency – with strengths, values and culture completely different from ours – was actually quite tricky. But it was incredibly inspiring, too.”
TBWA were determined to prove themselves worthy of this trust. “First, our goal was to come up with our ‘best ever’ print ad, with witty copy and thoroughly crafted visuals,” says Ville. “But then we decided to aim higher and create something that would deliver value for Sherpa also in the years to come.”
Sherpa’s brief had been all about collaboration, so the agency took that and pushed it to a level beyond just a one-off piece of communication. On behalf of Sherpa, TBWA has founded ‘Carrying Responsibility’ (Vastuun Kantavat in Finnish): an initiative where once a year, all of Finland’s top agencies will give one of their talents over for one day to work with Sherpa on a pro-bono project, chosen by Sherpa. Ville and his team have secretly gone around the houses and convinced the other Finnish agencies to get on board and today the print ad revealed this. “All the agencies are really looking forward to this new kind of collaboration – and the creative work it will lead to!” Ville says.
The creative to launch this is a front page long copy ad, in Finnish, explaining this initiative. The headline reads: “This is what courage looks like.” 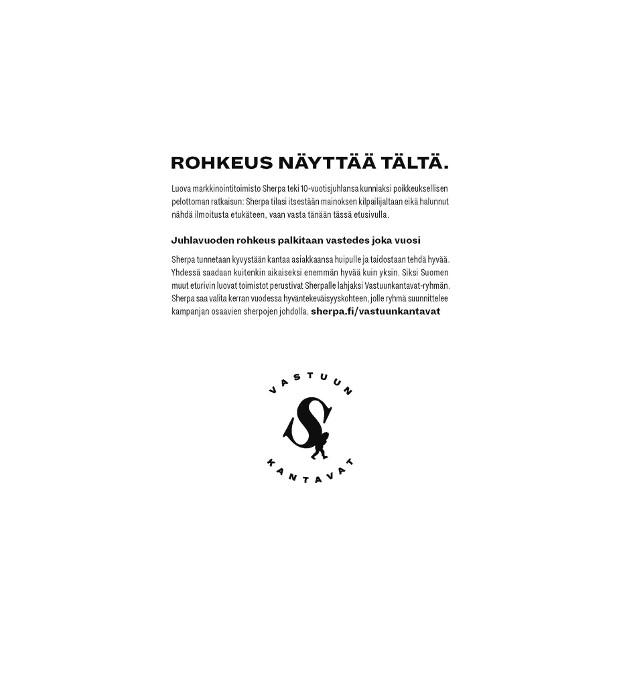 Today a reporter from the newspaper will personally deliver them an issue and capture the Sherpa team’s reactions on video and still pictures.
“It feels really exciting to give your brand to the hands of competing agency,” says Tommi. “But we know each other quite well so our brand is in good hands. Hopefully there is nothing inappropriate on the ad, that would upset someone. Our aim was this campaign to be nothing but a funny and a positive thing.”
It seems both agencies have their aims in alignment. “I think we demonstrated here that it’s possible to get really good results when agencies combine their thinking and creative forces,” says Tommi. “And actually doing things together instead of just talking about the importance of cooperation in the field of marketing. We also learned a lot about the nervous feeling clients sometimes get before launching the campaign. I think we can say that we understand them better now.”
Ville hopes this is a moment that can inspire the whole Finnish industry. “Sherpa has proved to be a true pioneer in openness and courage,” he says, “and it’s definitely where the whole industry is heading. Creativity should have fewer barriers and more collaboration.”