Why Boots is Having a Data-Driven Christmas

Boots is banking on utility over emotion for its campaign that's turning Xmas into CXmas to help us shop for fussy friends, writes LBB’s Laura Swinton 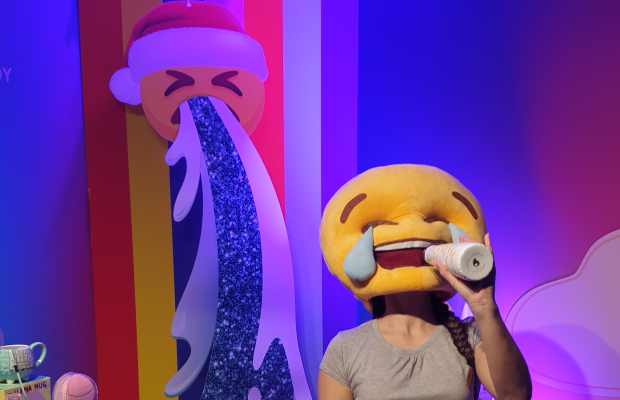 Crying at Christmas ads is so 2011, dontcha think? This year UK health and beauty retailer Boots reckons that people don’t need any help finding their Christmas spirit – though they might need help with some of the organising. That’s why they’re putting usefulness and product front and centre of their big festive campaign from WPP.
A consortium of WPP agencies -Ogilvy UK, Mediacom, Geometry, Bookmark and True Story - have ganged together for a strategy that’s all about helping people shop for ‘hard to buy for’ friends and relatives with carefully curated ‘Bootiques’ in-store and online.
“Our’s is half-festive, half not festive... deliberately,” says Dan Fisher, who has been a creative consultant for WPP on this campaign. “We deliberately thought that this should be the year to push back. For me, there are so many opportunities to feel festive and Christmassy that you don’t need advertising to do that. Particularly in the current climate, you need brands thinking ‘how can we help, what do consumers need? Do they really need us to make them feel Christmassy or do they need help?’
The Bootiques have been informed by a mixture of trend analysis and insight gleaned from Boots Advantage card data. There will be in-store activations and installations as well as a few pop-up stores around the country to showcase some of the ‘hero’ Bootiques (including ‘what to buy for the person who’s dreaming of sleep’, ‘what to buy for the strangely moody tweenager formerly known as your little angel’ and ‘what to buy the person who’s 100% vegan when you’re 100% clueless). More niche ‘Bootiques’ will also be showcased in print ads and online – and targeted ads on social media will serve up some personalised inspiration if you’re still pulling together your own wishlist for Santa.
Adam Zavalis is brand and marketing communications director for Boots and, as he explains, the brand has gone for ‘mass personalisation’ with the Bootiques approach. “We’ve got lots and lots of activity which is very targeted and very curated. So, it’s not just the six [Bootiques], actually, there will be hundreds and hundreds. We’ve got a lot of data from our advantage card, which is all digital, coupled with the likes of Facebook and Google, you can marry that data to target people for what they’re looking for. It’s taking CRM, one-to-one digital and doing that at mass scale. I think the challenges of the past have been that you get a bit niche and then you don’t get scale. We’re doing personalisation at scale.”
This isn’t Adam’s first Christmas rodeo, prior to joining Boots in February, he worked at Aldi for six years where he oversaw the birth of the supermarket’s beloved Kevin the Carrot. As he explains, the seeds of Boots’ 2019 festive strategy sprung from an internal revolution happening at Boots, driven by their new CEO Seb James.  “He’s put his foot on the accelerator in terms of the transforming the brand by bringing in so many new products. Boots has always reinvented itself, but it hasn’t really for a few years it’s really about ‘how do you change that?’ explains Adam. “For us, it was, well we’ve got a fantastic product story to tell this year whereas in the past maybe not; so, because we’ve got a fantastic product story to tell how do we tell it in an engaging, interesting way. Some people go ‘I’m going to be really emotional’ or ‘I’m going to be really rational’; well actually you still want to sell products so how do you do that in an engaging way.”
At a special launch event in London on Friday, journalists were invited to explore a range of Bootiques – staffed by a terrifying emoji-headed tweenager, a drag queen on the makeup stand and Sleepy Gary himself (timely Rick and Morty reference) showing off the range of sleep wellness products. Special goody bags themed to match the six hero Bootiques were also available for journalists and influencers – Boots CEO Seb James reveals, with a chuckle, that the most popular Bootique of the morning has been the sleep one. 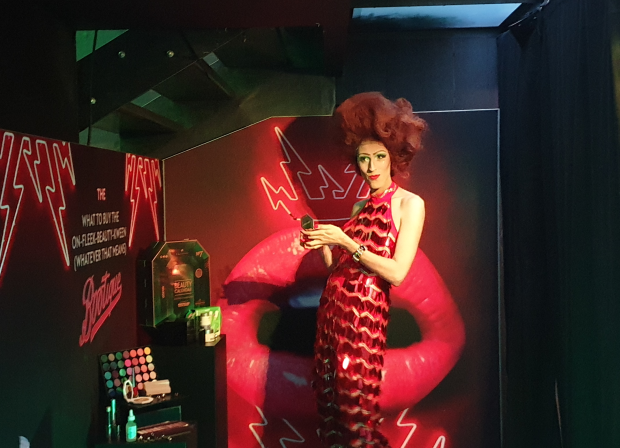 But while the products are front-and-centre, there’s another insight driving Boots’ approach this Christmas and it’s that gift buying behaviour is changing in the UK. People are being more considered in their purchases and the trend seems to be that less is more. It may be a result of Brexit uncertainty slowing down spending or it could be that the increasingly mainstream sustainability issue is making people think twice. Even Boots has taken notice in store – it has removed 148 tonnes of plastic from its gifting range this year and next year it will move entirely from plastic bags to paper bags, saving 1100 tonnes of plastic. 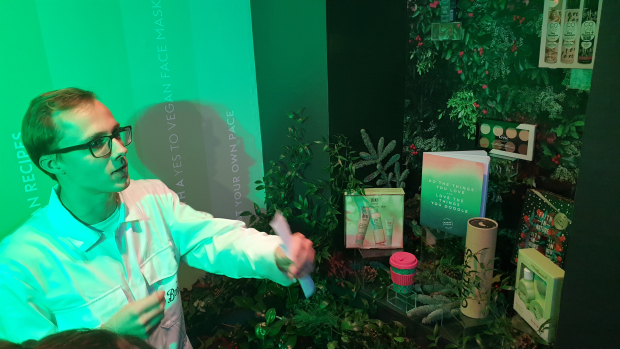 Boots’ marketing director Helen Normoyle points out that this more selective approach means that there is more pressure to make sure that the few gifts one does give are ‘right’. “Our Christmas research that we did this year shows that people want to give fewer gifts, they want to give better gifts and they want to give them to the most special people in their lives,” she says. “And so when you bring it down that way it can be quite stressful – how do you nail it , how do you give them the right thing. More than a third of us are quite stressed about buying gifts this Christmas, which is a bit mad because it should be one of the most enjoyable things that we do, because of the emotional investment that we make in it.” 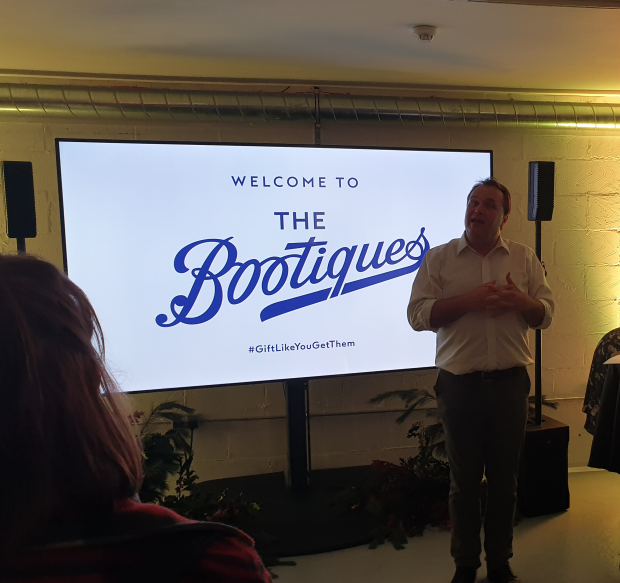 Seb James introduces the Christmas campaign
It’s a campaign that’s ultimately trying to bridge the business’s need to show off its products with customer need and the brand has definitely opted for a practical approach, leveraging CRM, data and CX capabilities across WPP. But that doesn’t mean they’ve dumped that mainstay of Christmas advertising, the big showy TV campaign. The spot, directed by Academy duo Si & Ad, launched at the weekend with a huge media roadblock on Saturday night. The hero spot was blast across all ITV channels, Channel 4 and E4, as well as the major Sky TV channels – and there was a concurrent online Youtube and social media takeover too.
“We hope we’re hitting the buttons,” says Seb James about the central TV ad and the wider campaign. “We are always very scared when we launch a Christmas ad, we hope that people love it. We think that it’s fun, we think that it’s exciting and we think that it helps people pick the right Christmas things for the people that they love.”