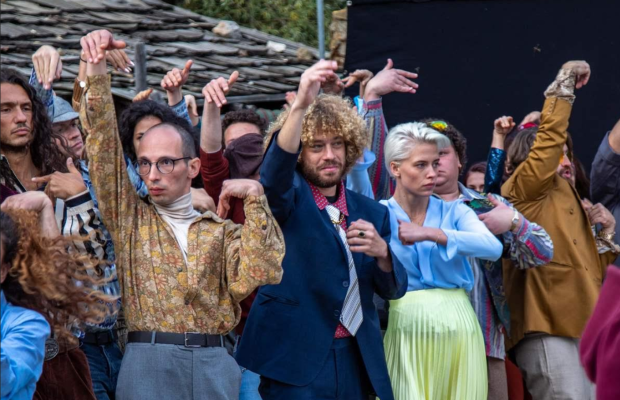 A music video about hardships of entrepreneurs, directed by Emir Kusturica for a song by popular Russian band THE HATTERS, has entered the Top-3 of Russian Youtube overnight.

Many internet users can relate to the video, as bloggers, influencers and people of art themselves represent small businesses.

The mission of Tochka Bank – the inspiration and the hero of the music/advertising project – is to make life easier for entrepreneurs within the framework of the Russian market. The economy, government, monopolists – it all fills an entrepreneur’s everyday life with craziness, adventure, and the constant necessity to act while relying only on yourself and your allies.

You can check out the music video below:

The video pictures the Russian market of small and medium-sized businesses as a gypsy one – grotesque, noisy, chaotic and carnivalesque. An entrepreneur has to overcome difficulties that the main antagonist – the Boss – is responsible for. The Boss is a vivid two-in-one representation of the government and monopolies. Together with his family, he terrorizes local businesspeople by demanding bribes, robbing the spots and collecting cash, not paying the bills and bogarting other businesses. So, it’s Russia as it is. However, we believe that together we can make it right.

Emir Kusturica directed the video; his art had brought the gypsy market to life with all the aesthetic and conceptual details so the market got its own laws, everyday life, fashion, personalities. The Hatters – a popular Russian music band – wrote and performed the song. The main characters were played by popular bloggers and entrepreneurs who write about fashion, politics, urban planning and other topics that interest a wide audience.

Emir Kusturica, director, said "the shooting was very complicated in terms of the quantity of frames per day and the complexity of the story itself. We needed to perform a huge thing within 3 short shooting days. The speed was hard to believe - we did a 6 min video in 3 days. I guess nowadays we can call an advertising movie/clip a real art. But those who create the advertising campaigns should have in mind the most important things: storytelling, working with actors. They shouldn’t think only about brand colours of the product or how you call it. And they should trust the directors and crew they hire. Otherwise, what’s the point?"

The song is a rebellious hymn for those who are tired of anyone trying to get in the way of their wildest dreams, and as the narrator says it out loud in a straightforward way (“You say no and I say go f*ck yourself”), the lyrics evolve to perky lines “Listen, man, I’m here to take it all”. The hero of the song is willing to take risks (“Everybody here is walking on the edge”) and fight for a better world to live in – the world where you can achieve it all at once.

Song by THE HATTERS: All at once

Take a Blindfolded City Tour with this Innovative Project