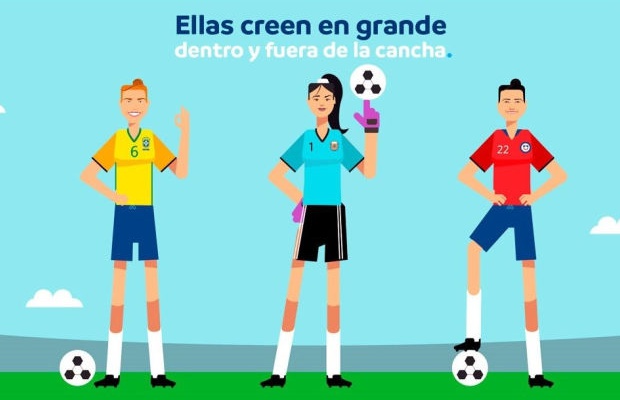 The 2019 FIFA Women’s World Cup will take place in France in June and with more funding than ever before, it’s set to be a record event for women in sport. However, women’s football in South America doesn’t get the same level of attention. Teams receive very little funding and only a small audience follows the event.

To encourage more women to participate in the sport, CONMEBOL and Garabato MullenLowe Paraguay launched a campaign to capture the attention of South American football fans and promote the development of women’s football across the continent.

They released an animated video featuring three women sharing their testimonies about what happened when they received a positive result from their pregnancy tests alongside the headline: 'Three Players Tested Positive.'

The news was shared on the official CONMEBOL website during the live transmission of the draw for the most important tournaments in the region: CONMEBOL SUDAMERICANA and the CONMEBOL LIBERTADORES. For these players, becoming a mother did not end their careers. After they had their babies, they continued to strive on their journey to reach their dreams and will be representing their countries in the 2019 FIFA Women’s World Cup.

“We wanted to find the most engaging way to celebrate the careers of some of the best world cup players on the continent. The effort they make to compete is really moving so we wanted people to know about their stories as they are so often ignored,” said Santi Morello, general creative director for Garabato MullenLowe Paraguay.

Mauricio Alfaro, CEO added: “Historically, prejudice has distanced women from football and for many players, being a mother and a footballer still generates preconceptions that drive many women away from the sport and stop them from pursuing their passion. With this campaign, we wanted to send a constructive message to society that women can be both mothers and footballers.”

Fabimar Franchi, development manager for Women’s Football at CONMEBOL, highlighted how female players often take part in these types of communication efforts to help spread the word about their achievements and encourage more women to join the sport. CONMEBOL continues to work consistently on breaking down barriers and making football a sport for everyone because in South America, ‘Football beats prejudice’.