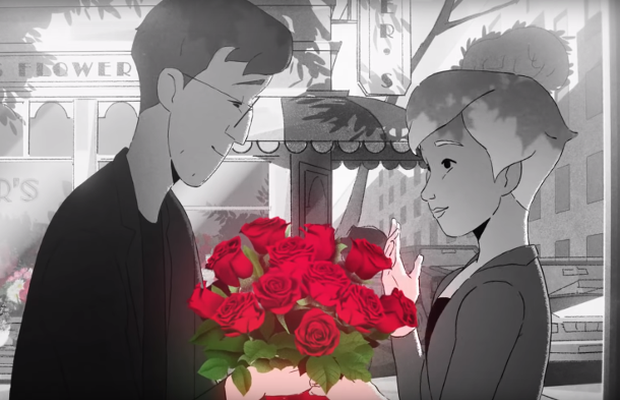 WIZZ director/animator Gary Levesque (one part of former directing duo Flying V)  teams up with Blacklist in a touching film for US flower delivery service Teleflora.
In his first solo directorial debut, Gary portrays a young man who expresses himself with red roses in the hopes of finding his one true love. In this 90-second film, we follow the journey of this hopeless romantic who, in spite of a string of heartbreaks, remains ever optimistic in being able to find his soulmate in life.
Gary says: "When The Wonderful Agency and Teleflora approached me with this project, I was captivated by the idea of working on a long format film with such a strong creative potential. It allowed me a better flexibility to set the context, the background and to develop in detail the evolution of the main character as we follow this man over a long period of his life - from his childhood to adulthood. This sequence of "slices of life" reminds me of the introduction to Disney's film "Up", where the most important moments in Carl's life play out one after another.
"It was a rich and challenging experience to see the character's design evolve throughout the film, both in terms of styling and the ageing of his face, while also working on a range of  expressions.
"I come from 3D, so the creation of this universe in 2D all in black and white (with a few brushstrokes of red to highlight the flowers ;) ) was a great opportunity to create longer shots, a varied cast of characters and to craft a more elaborated narrative."
The campaign launches across multiple platforms including YouTube, Hulu, Tubi and Facebook & TV for the U.S. market...just in time for Valentine’s Day.
Check out some early concepts here:
Here is some insight into what the character development looked like:
And finally, a collection of animation breakdowns:

Poulehouse Cares For Chickens in this Clucking Eggcellent Animated Campaign

Animals in Concert: Illogic Are Back with New Short 'Maestro'