Samaritans Campaign Is Handwritten by Those Who Understand Best 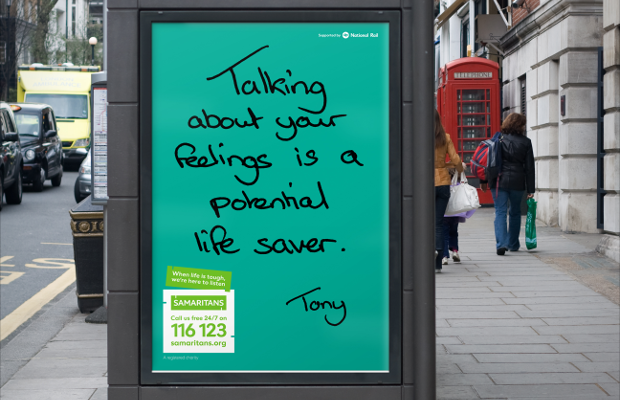 Samaritans launches a campaign today (Real People, Real Stories), supported by National Rail, developed by Mother and Goodstuff, in which men who have been through tough times share their stories to encourage others to seek help by contacting Samaritans 24/7 free on 116 123 or Samaritans.org.
Built on the insight that, when in a place of desperation, the most comforting thing to know is that you’re not alone, the real power of this campaign resides in the fact that it doesn’t come from the brand, but from those who understand best: Real men who have come through dark times themselves, from depression to suicide attempts. They spread hopeful words and inspirational stories to people currently in a desperate situation.
The campaign comes as Samaritans releases results of a nationwide survey, which shows two in five (41%) men in England, Scotland and Wales aged 20-59 do not seek support when they need it because they prefer to solve their problems themselves. It uncovered the main reasons why men find life tough and struggle include debt or financial worries (36%), relationship breakdown or family problems (30%), loneliness or isolation (29%) and job loss or job-related problems (25%).
Paul McDonald, Executive Director of External Affairs at Samaritans, said: “We didn’t want to create just another awareness campaign, we wanted something authentic and emotive. So we asked men to share their stories with us. Men who have been through tough times and come through the other side. They wrote some words down, and we’ve got those words on the posters to inspire and encourage other men going through difficult times to seek help, and to contact Samaritans if they’re ready to talk.”
“Our survey results found that although 78% of men say it’s okay to admit you’re not feeling okay, many still avoid speaking out when they’re finding life tough. A quarter of men (25%) felt their problems weren’t important enough to warrant calling a helpline, which is one of the reasons this awareness campaign is so important.”
Almost 3 in 10 men (29%) said loneliness and isolation had made them feel low in the past, Paul explains, “At Samaritans we understand the value of talking and the power of human connection. Just two people talking can really help that person to stop, breathe and start to see a way through their problems. Samaritans gives people the space to be themselves. We won’t judge or tell you what to do, we’re here to listen.”
National OOH, showcasing the inspirational handwritten words, has been planned to reach those in key geographical areas and a digital campaign utilising crucial behavioural triggers to identify those who show signs of vulnerability. As well this, Samaritans will be hosting more than fifty local events in England, Wales and Scotland.
Additionally, activity to lever the power of stories and conversation with talkSPORT will include a thoughtful and thought-provoking editorial series shining a light on the positive impacts of real-life stories. Using sport as a vehicle to talk about mental and emotional wellbeing, the activity will feature ex-professional sports stars including Nigel Owens, Chris Kirkland and George Groves. Whilst the partnership will be promoted through commercial activity, the talkSPORT team will be supporting the campaign with additional editorial amplification.
Laurie Palacio, Deputy Head of talkSPORT said “In the sporting industry, people struggling to cope is sadly a prevalent issue and we are proud to be working with Samaritans to combat the stigma associated with reaching out for help. We recognise the role in which we can play to help others to not feel alone in what they are going through. Through our programming, our work with Samaritans will raise the awareness of the help that is always available.”
Stories included in the campaign
Tony Robertson, 38, suffered from undiagnosed depression for most of his life. Tony struggled to cope when he lost his job, his home and partner, and attempted to take his own life. “I was in my hospital bed the morning after and I saw my mum sat there upset, and something clicked. I started talking to my mum about how I was feeling. I think having that human connection really does bring that home. I hope by sharing my story as part of the campaign, it will encourage other men to speak up and seek help before getting to the stage that I got to. Talking really can save lives.”
Ollie Mehra, 23, has suffered from anxiety and depression since he was fifteen. When his relationship ended, he described it as “the straw that broke the camel’s back”. He began to have suicidal thoughts. “When I told my friends how I was feeling, four of them said: ‘Mate, so have I. I know how you feel. I’ve seen a counsellor too.’ Instantly I thought to myself, right, I’m not the only one. It isn’t a weird thing. I should have got help sooner, we all should have talked about it sooner.”
Darran Latham, 38, shares his story, “It was pretty difficult the first time I rang Samaritans. I was homeless by that point and I’d been put in some emergency shelter. I was drinking quite heavily. I’d had suicide attempts in the past, but it was usually when I was drunk. One morning I woke up and I didn’t have that to hide behind. I didn’t want to not be there. That’s when I reached out and called Samaritans. And I’m really glad I did.”
Ex-Premier League footballer and professional boxer, Leon McKenzie is supporting the campaign, sharing his story to help encourage other men to seek help. “I know how tough it gets when you’re in that dark place. I’ve been there, not wanting to exist anymore. By sharing my story and supporting the campaign, I hope other men understand that you can climb back up with some help. It’s so important to seek help early on and Samaritans are here to listen.”