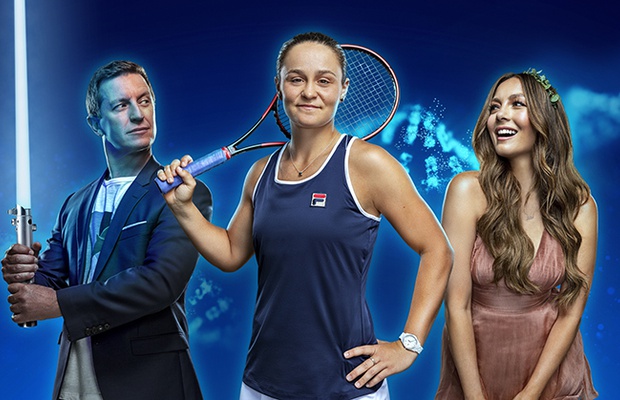 The interactive Disney+ DNA test, which can be taken at dna.disneyplus.com.au, measures your reaction to hundreds of scenes from iconic films and shows across the Disney, Marvel, Pixar, Star Wars and National Geographic library that make up Disney+.

Your reactions are analysed to reveal your Disney+ DNA make up, represented by famous heroes, villains and princesses that are featured in Disney+, along with the reasons why you share attributes with each character.

To encourage Australians to find out who they really are, Disney+ recently enlisted the help of several well-known Aussies including World Tennis Champion, Ash Barty, entertainer and TV presenter, Rove McManus, and singer Ricki-Lee Coulter, and asked them to delve deep into their own, albeit surprising, Disney+ DNA results.

Ash Barty said it’s no secret that she’s a bit of a Disney fan: “When they asked me if I’d be willing to take a Disney+ DNA test to prove what I was really made of, I said hakuna matata!

“I have always loved Simba and Moana. But when I found out that I was 56% The Hulk I was a bit surprised. Even though I didn’t know much about the big green guy I realised we shared some similarities… I’d like to think I have a bit of his endurance, determination and superhuman strength!”

Says Rove McManus: “I am super excited to now be on board with Disney+. I’m an unabashed fan of their entire range of content – and can even proudly say I am part of a teeny tiny bit of it.” Rove famously voiced the role of Crab in Disney Pixar’s Finding Nemo.

Ricki-Lee said: “I am so excited to be part of the Disney family and to be involved in the Disney+ DNA campaign with Rove & Ash. I’ve been obsessed with all things Disney since I was a little girl, so to grow up and work with such an iconic brand alongside two Aussie icons is a real dream come true in so many ways.”

The Disney+ DNA campaign kicks off today. To complete your Disney+ DNA test, head to dna.disneyplus.com.au

Disney+ is available at disneyplus.com – with all new customers eligible for a 7-day free trial.

More from The Special Group

The Australian Financial Review Asks ‘Do You Subscribe?’ in Latest Ads