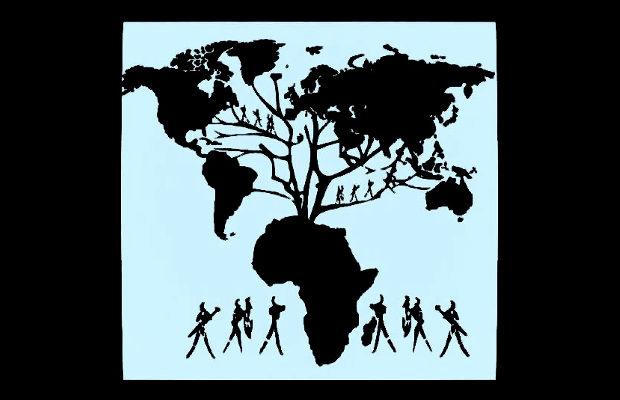 There’s so much to talk about with this playlist - it has been designed to be equally alluring as challenging, showcasing alternative music that has slipped under the radar of mass appeal, but still has an indirect impact on modern music. A melting pot of hip hop, jazz, cumbia, rock, psychedelic, funk, house, folk and highlife stretching the corners of the globe from Japan to Columbia.
We open with a track lifted from the recent fifth album by the nine-piece instrumental collective from Amsterdam, Jungle by Night! They fuse krautrock, dance, jazz and afrobeat together, resulting in something which is the perfect way to start the Roots playlist. They are a danceable and energetic act - definitely worth trying to see them live.
An artist worth keeping an eye on is Cameroonian singer Blick Bassy. His track Kiki was used to launch the iPhone 6 in 2015, and he returns with a new album, 1958. This album has been dedicated to the memory of Ruben Um Nyobé, the anti-colonialist leader of the Popular Union of Cameroon (UPC), who was shot dead by French troops on 13th September 1958.  The featured track Woñi, focuses on Bassy’s soulful, sonorous voice; a voice that is gently elevated by subtle guitar riffs, a reflective melancholy trombone and a cheeky trumpet.
Bibio is back with his blend of electronic, folk, hip-hop, and rock music with an adventurous outlook and atmospheric production values - I’ve selected the track Old Graffiti from his brand new album Ribbons.
Yasuaki Shimizu’s Kakashi, from Japan released in 1982 sounds like up upfront track blending jazz and electronics, but was very rare until 2017 Nippon Columbia/Jet Set released this first ever pressing outside of Japan.
How was Jack Jacobs’ I Believe It’s Alright not a hit in 1971?! Melodies International have just re-issued it - a truly uplifting song!
I Love You - East of Underground. With only a handful of original copies known to exist, East Of Underground was reissued for the first time ever by Wax Poetics Records in 2007. The song I Love You was still relatively unknown until 21 Savage sampled it on his latest A Lot. This track highlights how the culture of sourcing and unearthing rarities can have a huge impact on modern commercial music.
Justin Hinds & The Dominoes, Tommy McCook & His Skatalites ‎– Over The River. The producer of this record, Duke Reid, was one of the founding fathers of the Jamaican music business, perhaps second in importance only to his chief rival, Clement "Coxsone" Dodd, both as a record producer and entrepreneur. Much like Dodd, Reid started his career in music as a DJ, then a sound system owner, then a label head (most notably of Trojan and Treasure Isle), a highly accomplished producer who masterminded some of the greatest Jamaican music of the '60s.
Fans of Jimi Hendrix should go straight to Living in the Ghetto, by Purple Image. How has this track escaped the public consciousness?
With a rip-roaring harmonica in the first half of the track, Fear Itself by Crawling King Snake is a blues song that has been recorded by numerous blues and other artists - it is believed to have originated as a Delta blues in the 1920s.
Probably the farthest out any children's record ever got, Stark Reality Discovers Hoagy Carmichael's Music Shop descended on unwitting preteens in 1970, thanks to Boston's public television station WGBH and one of its producers, Hoagy Bix Carmichael. An unlikely DJ favourite, Stark Reality finally made it from dust to digital in 2002 with a track on the Stones Throw compilation Jukebox 45's. A full album reissue followed one year later, titled Now, and the deluxe treatment (Acting, Thinking, Feeling: The Complete Works 1968-1978) appeared on Now-Again ten years later.
Up-and-coming artist India Jordan’s track DNT STP MY LV is on here - she plays a gig this week Thursday May 2nd at Rye Wax in Peckham, definitely worth checking out if you’re in London.
We close on Yos Olarang, a Cambodian garage rock musician, and a leading figure in that country's rock scene of the ‘60s and ‘70s. He is presumed to have been killed during the Cambodian genocide that took place under the Khmer Rouge between 1975 and 1979. Aularong was regarded as an original artist, incorporating elements of soul, funk, and rock into his songs.
These are just some of the highlights in what I hope is an enjoyable musical journey.