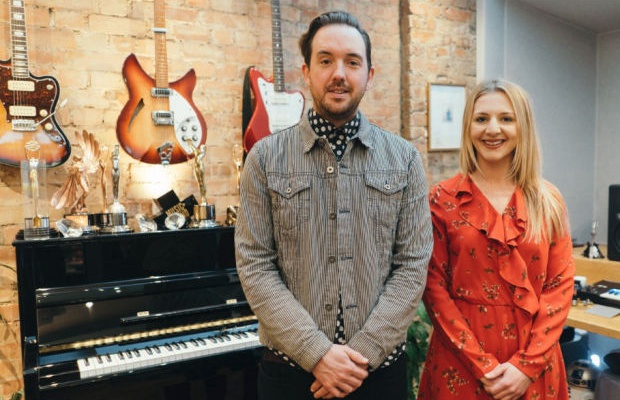 Chloe is a singer, violinist and Royal Academy of Music graduate. She has worked professionally in musical theatre, including performing in children’s theatre, new musical theatre and concerts in the St James Theatre and The Prince Edward Theatre. She MCs and hosts the popular Sofar Sounds gigs across the capital and also publishes a music blog featuring new, unsigned British artists.

“I’m really excited to be joining Adelphoi Music as a producer, at such an exciting time in their 26 year history. It’s great to be part of such a talented team of producers and composers and I’m very much looking forward to creating outstanding work for our current and future clients.”

Fellow producer Jake was raised by Morris dancers with a pink tambourine in hand. The only antidote to this was to become a drummer/percussionist. He went onto study music production at Leeds College of Music, where he developed his love for music production. Since then he has performed to audiences all over the world as both a DJ and drummer.

Over the last 15 years he has worked alongside artists such as: Mumford and Sons, Ed Sheeran, Chaka Khan, The Stereophonics, Boy George, Paloma Faith and The Noisettes at some of Europe’s most prestigious venues and festivals such as Glastonbury Festival, Montreux Jazz Festival (Switzerland), Paradiso (Amsterdam), Bataclan (Paris), and Shepherds Bush Empire. More recently he has turned his hand to composition for adverts where he was first introduced to Adelphoi.

Jake says “I am super excited to be joining the Adelphoi music family. Having worked for them as a freelance composer in the past I knew what an amazing team I would be joining! I’m looking forward to getting stuck into some big projects and help to make some amazing music.”

Kirk Zavieh, founder of Adelphoi Music says: “Both Chloe and Jake are the right fit for us, Chloe is passionate about music and a real professional. Jake has a deep musical background and experience in this kind of work, combined with leadership qualities which I believe he can explore properly at Adelphoi. As a group we are a truly capable team: packed with talent and experience, creating outstanding results for our clients.”