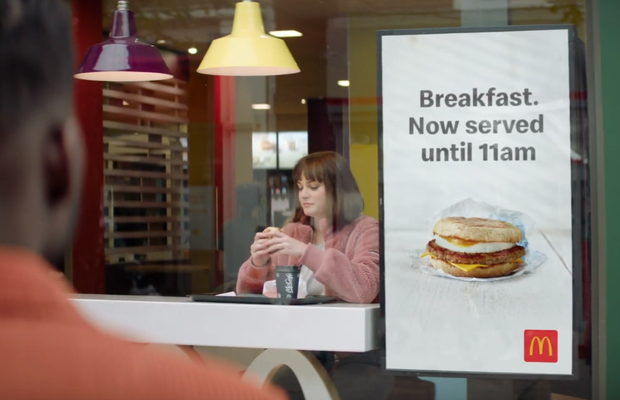 McDonald’s and Leo Burnett London have launched an integrated campaign entitled ‘Near Misses’, officially announcing McDonald’s Breakfast will extend its serving hours which usually ends at 10:30am, to 11am every day.

The central theme of the campaign is based on situations which are all too familiar for many McDonald’s consumers; missing the 10.30am deadline and not being able to get their McDonald’s breakfast.

Directed by award-winning director Jake Mavity in partnership with Leo Burnett London, the campaign brings to life that feeling of everyday lateness resulting in a near miss, taking those moments of disappointment and frustration we can all identify with and flipping them into something magical.

In the 30-second spot, we see a marginally late lady just missing her bus, a father and daughter missing a goal at a sports match, a commuter just missing his train to work, and a lady missing closing time at a shoe repair shop.

As the spot continues the audience sees a man running to McDonald’s at 10:32am, looking disappointed and thinking this would be yet another example of a near miss. He then realises McDonald’s breakfast is now available until 11am. The film ends with the strapline: 'No Rush, No Drama' to summarise the luxury a little more time can give you.

Dan McCormack, creative director at Leo Burnett said: “When you’re late, you rush. When you rush, there’s drama. Never is this truer than when you’re in a race against the McDonald’s 10:30 breakfast deadline. Missing it by a meagre few minutes is heart-breaking. But, the deadline’s been extended by 30 minutes, so there’s no rush and no drama.”

Thomas O’Neill, head of marketing at McDonald’s said: “We can all relate to the pain of missing out on McDonald’s breakfast. Our customers have been asking us for more time in the mornings to enjoy breakfast, so we are excited to extend our breakfast serving time until 11am. This campaign dramatises familiar moments of lateness, bringing the true customer insight to life."

The campaign will be distributed across TV and VOD, with additional marketing support in press, social, radio and digital display.

This Campaign Makes You Think About McDonald's Without Even Mentioning it