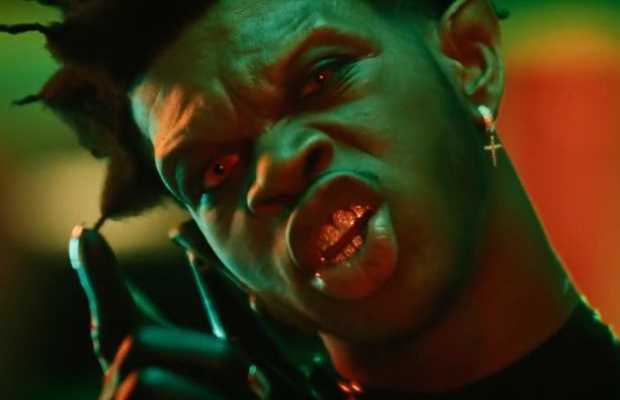 He won our hearts with the mash-up smash hit (mash hit?) Old Town Road, and now Lil Nas X is back with a horror tinged promo that does a fair bit of mashing too. Monster mashing.
Directed by Prettybird duo Bradley & Pablo, the music video sees the charming rapper with a cheeky glint in his eye transformed into a vampire. It gleefully brings together an assortment of '80s and '90s vampire pop culture references – Blade, the Lost Boys… and we reckon there’s a touch of Buffy (or maybe Faith?) about the crossbow-carrying vampire slayer. But Lil Nas X has never been about sticking to one thing creatively, and so the promo also lobs in a wedge of The Matrix. And it’s a brave music video director who decides to parody Thriller, which infuses everything from the opening scene to the forest road location to elements of the choreographer.
The story was devised as a collaboration between the directors and Lil Nas X himself – the meme-loving artist isn’t afraid of getting stuck in.
“He's game for anything. We had him flying around on wires for Panini and hanging upside down, then running around a parking lot at 5 am in a leather suit and platforms for Rodeo,” says  Frederick Ross, who is creative director/VFX supervisor at Chimney, the company responsible for turning the video into a truly cinematic experience, with its post and VFX work.
But while Lil Nas X was able to bend reality with ease by tapping into The Matrix, the team bringing it all to life had to tackle their challenges with old fashioned ingenuity and hard work. As the creative ideas evolved, Chimney was suddenly faced with having to whip up a full, digital body double of the artist.
“As with most music videos, budget and time constraints. Originally, we were not slated to do a DigiDouble. At the end of principal photography, the label decided to go that route for the jump at the end of the video. That gave us under 2 weeks to get the double of Lil Nas X through our pipeline, which included a 3D scan of him and a mocap session with a stunt double,” says Frederick.
But for all involved, working with the energetic talent, was a joy. “Having done on both Panini and now Rodeo, Lil Nas X videos are always a treat because he mixes in different genres with interesting pop culture references,” says Frederick.
And this cornucopia of pop culture hooks can’t be an accident for the artist who first found fame on TikTok and who is deeply embedded in the world of memes. Before its ‘official’ music video, Lil Nas X first shared the song on TikTok before creating a video for it by cutting together a promo made of clips from Red Dead Redemption. The track became the backing to a popular TikTok meme ‘The Yeehaw Challenge’. And so, with so many flavours and references in Rodeo, as well as an on-trend '90s influence it looks like the video has been designed to be packed full of meme fodder.