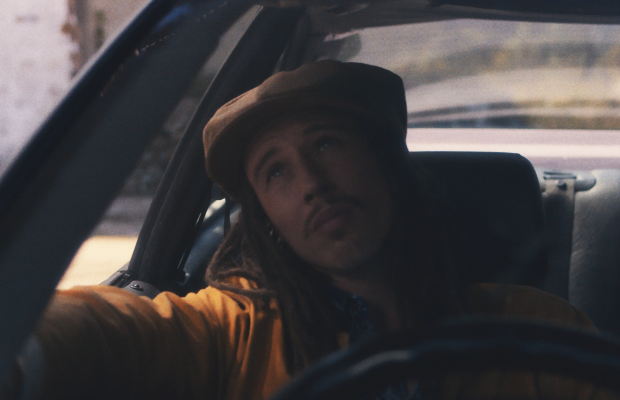 The breakup of a relationship can be a dark time, with those involved reflecting on the past whilst facing the reality and emptiness of the present. Great Guns director Calum Macdiarmid explores such a theme in his latest music video for singer-songwriter JP Cooper. A dark, brooding promo, ‘In These Arms’ follows a man (played by JP Cooper) looking back on the highs and lows of his relationship from the front seat of an abandoned car.

Calum previously worked with JP Cooper on his recent promo for ‘Sing It With Me’ and was this time approached by Island Records to develop the creative concept and narrative for the latest single. After working on a demanding shoot abroad for the first video, Calum and JP established a close working relationship, with JP open to all the ideas pitched by Calum.

The video begins as JP Cooper glances into the rear-view mirror of his car, seeing the flash of a happy memory with his partner. These lighter moments – the couple embracing, kissing, and sharing tender moments – are then intercut with the stark reality of the situation. In the present day, the couple are distant, sat on other sides of the car, not touching. Director Calum Macdiarmid balances the light and dark of a relationship that, once filled with joy and affection, is beginning to feel loveless and claustrophobic. The relentless beat of JP Cooper’s song is reflected in the difficult narrative themes established by Calum.

Director Calum Macdiarmid comments: “I was really interested in the duality of a relationship where it’s falling apart but you still love each other deeply. Rather than using dialogue or obvious actions, I thought the subtlety of body language would be the most effective way to capture those heartbreaking, paradoxical moments. Obviously, this gives way to some emotional fireworks towards the end, but I guess that’s the inevitability of a crumbling relationship.”

Alongside JP’s reflections within the car, we also see shots of a second vehicle suspended above the first, falling closer and closer to the ground in slow motion as the video progresses. Using the image as a metaphor for the death of a relationship, Calum shows the inevitability of a clash when a couple knows things are going wrong. The only question is how destructive the end will be.

Speaking of the car drop, Calum notes: “The only way we were going to achieve it was to do it for real. That meant a huge crane, some smoke grenades, and a wilful passion for destruction! The shoot was utterly nail biting, we only had those two cars and had to get it perfect it one take. Luckily it was a bright day with no wind and the stunt guys had the confidence of people that drop cars daily. We shot on a Phantom camera and I put a little move in post. I was surprised at how well the Mercedes came out of it actually – I thought it would flatten into the ground more, but it appeared in pretty good shape considering!”

Today You, Tomorrow Me: How Chris Neal Adapted a Timeless Parable for a Timely Film