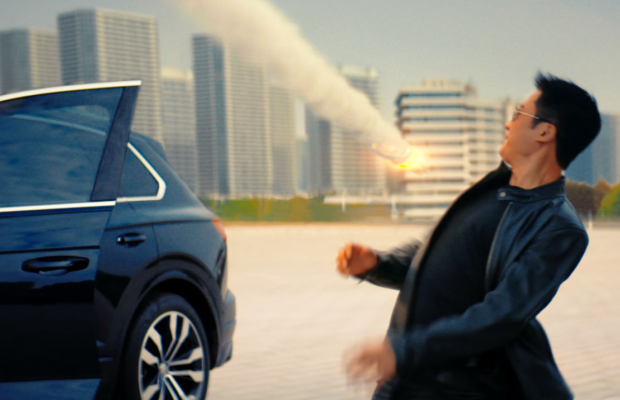 In China, the SUV market has been roaring fiercely. Since 2013, the appetite for big, beautiful monsters has boomed – and it’s expected that the growth in this part of the market will continue well into 2022, when sales are predicted to reach 15 million units. With such opportunity, there are many players in the field – from global megabrands to local Chinese automakers.
To stand out, what you need isn’t horsepower but of star power. That’s why Volkswagen recruited megastar actor, director, producer and martial artist Wu Jing to launch their Touareg campaign in December. Wu Jing, much like Tom Cruise, is known for doing his own stunts and he’s the star of the highest grossing film ever at the Chinese box office, Wolf Warrior 2.
The film sees Wu Jing teach a novice stunt driver how to pull off some nerve-wracking moves. It’s an activation for a campaign that allows people to star alongside Wu Jing, through video apps and national test drive events. The creative for the campaign was devised by Shanghai-based creative agency Goodstein, with strategy from Inspire Communications and production from Gwantsi.
LBB’s Laura Swinton spoke to Goodstein creative director Georg Warga and creative producer Maureen Sherrard to find out more.

Volkswagen_Do Your Own Stunts from Goodstein on Vimeo.

LBB> What was it that VW were keen to achieve with the campaign?
The Touareg matches the price level of a BMW X5 but not necessarily its prestige in China. We knew getting people behind the wheel is key for consideration. The whole campaign is elaborate activation for a test drive event to ‘Do your own Stunts’ endorsed by Wu Jing.
LBB> How did you get to the idea of stunts and involving a big celebrity like Wu Jing?
There are many action hero-type actors that boast they do their own stunts. But Wu Jing has been a trained martial artist since childhood and if you follow Wu Jing’s fan blogs, you can tell - countless broken fingers, missing tip of his left thumb, a broken nose, 17 broken legs and more than a 100 stitches – that the man really does his own stunts.
LBB> For our readers outside of China, can you give us a bit of context about how big a star Wu Jing is and why he was the perfect fit for the campaign?
He built a reputation by playing the national hero in blockbuster films that he writes, directs and produces. Wolf Warrior 2 and Wandering Earth are the two most successful Chinese films of all time and he stars in both of them. You could maybe compare him with the Sylvester Stallone of the 80s, yet such comparison doesn’t do him justice. He is a super star in his own right. I am certain you will see him soon alongside Dwayne Johnson. 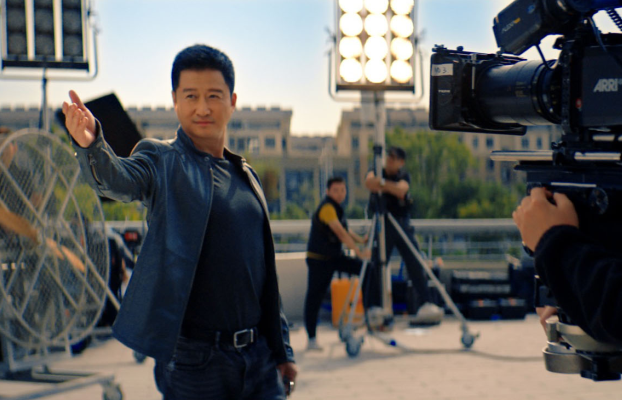 LBB> From a production perspective, what were the biggest challenges and how did you overcome them?
We knew we only had one day with Wu Jing yet we didn’t want to compromise our concept. So, we wrote a second character into the film. One that carries half of the load in terms of comedy, if you will. That had his own challenge - we needed to convince Wu Jing’s management that he is still is the star of the film even if he doesn’t drive the car at the end.
LBB> What was the trickiest stunt?
The stunt where the car drives on two wheels between the trucks. It was set at the end of the last shooting day and we were rapidly losing light. Although the stunt drivers were super confident, we all held our breaths there for a while. We only had time for three runs and the third one made it into the cut.
LBB> What did director Limin Wang bring to the project and why were they right person for the job?
He worked with Wu Jing before and had some stunt driven projects under his belt.
LBB> What are your favourite memories from the shoot?
I think meeting Wu Jing for the first time in his hotel room. We came there with our team to discuss last minute script changes. Six billion yuan at the box office yet totally down to earth - he greeted us in his boxer shorts.

Nike Kicks of Chinese New Year with a Comedy of Manners