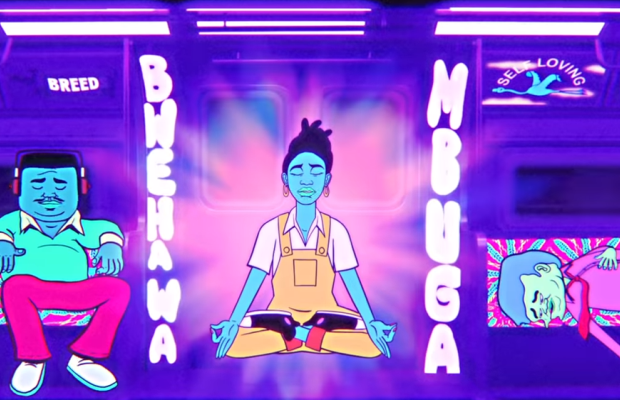 French-Cameroonian artist James BKS is looking to the future with his track ‘New Breed’, a collaboration with Idris Elba, Q-Tip and Little Simz. The song draws from African sounds and influences. There are touches of Swahili gospel music and the percussion of Cameroon, which interweave with urban production and the rap stylings of London’s grime scene and old school US hip hop.
Blink Ink directing duo Stevie Gee and Essy May have brought their distinct styles together for a video that celebrates this new wave of creativity. The video combines retro-futuristic ‘scapes that borrow from the soft airbrushed cover illustrations of ‘60s sci fi novels with flat, heavily-lined, boldly-coloured animated characters.
The video, which skips from ‘90s New York neighbourhoods to a stylish flying sauces, a booze-drenched London tube carriage and a transcendental encounter with the universe is the perfect playground for the duo’s creative experiments.  The choral refrain that runs through the track is the Swahili for ‘African Golden Wolves’, and the sharp-eyed will spot wolf iconography popping up throughout the promo too.
As James told the BBC, the song is ‘not about awareness or being woke’ – instead it’s a highly personal journey and exploration of an emerging creative generation he describes as the eponymous ‘new breed’.
“It’s truly about the next phase, how we’re nearing the goal, that we’re working together, building bridges between Francophone and Anglophone. And we’re trying to guide the people who will be next who won’t see or live what our parents went through to get to America or Europe,” he says in the same interview.
Elsewhere, James BKS (who was the first artist signed to Idris Elba’s 7Wallace label) has also expanded on the tracks meaning for him and his collaborators.
“Little Simz, Idris Elba, Q-Tip and me strongly and proudly represent the New Breed movement, it’s not only the name of the track but the new modern way to approach music with no borders, no judgment, no labels. We have learned from our past mistakes and victories and our eyes are on Africa, while in the meantime we embrace our own personal paths, respectively in the UK for Little Simz and Idris Elba, in the US for Q-Tip and in France for me”.