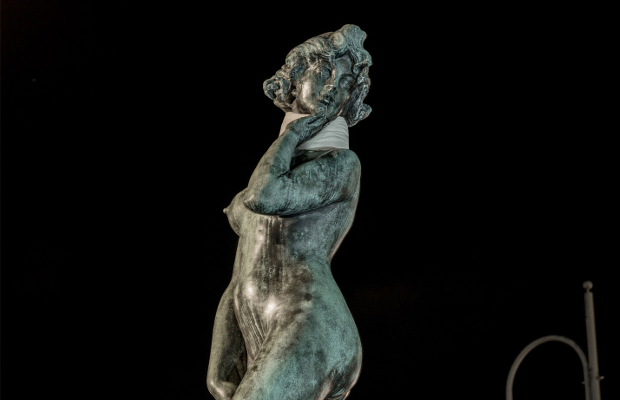 Havis Amanda, a female statue located in central Helsinki, is one of the most iconic pieces of art in the capital of Finland. However, the over a 100 years old statue has constantly been a victim of abuse. Following major national sporting achievements and during big holidays, Havis Amanda often serves as a centrepiece of celebration. It’s common to see people – mostly men – climb on the statue. This has come to a point, where the fragile female figure is now in danger of partially collapsing. Most threatened is its weakest part – the neck.
Nollalinja, a Finnish nationwide free-of-charge helpline for anyone who has experienced violence or a threat of violence in a close relationship and TBWA\Helsinki decided that the Havis Amanda statue could serve as an important reminder of domestic violence. This is why the statue now wears a neck brace.
“Women are in a much greater risk of being victims of domestic violence in Finland compared to other Scandinavian countries. This is why it’s extremely important to spread awareness about the issue and make sure that women know there is help available.”, says Johanna Hietamäki, senior researcher at the National Institute for Health and Welfare.
According to Statistics Finland's data, there were 9,900 victims in domestic violence and intimate partner violence offences reported to the authorities in 2018, which is 3.6 per cent more than in the previous year. Of adult victims, 76.5 per cent were women.
“This year we have received a record amount of phone calls. That means over 11 800 phone calls by the end of October, which is more than what we received in total last year.”, Johanna continues.
“For us, Havis Amanda was the perfect public figure for this important cause. After all, she is a young lady being assaulted regularly mostly by men.”, says Heidi Taina, creative director at TBWA\Helsinki.
Statistics can be found here: One and Two