Facing It: A Startling Stop Motion Study of Social Anxiety 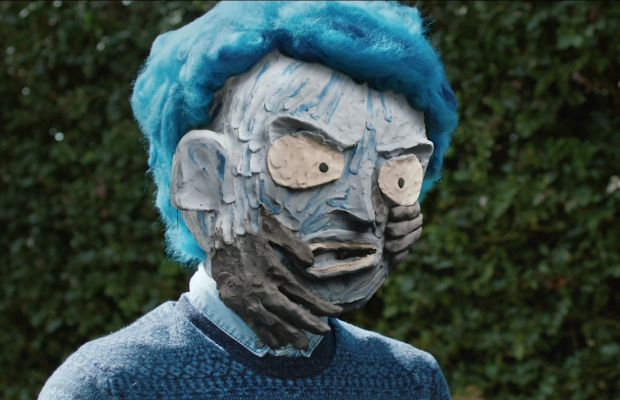 We’ve seen live action filmmaking blend with animation before, but nothing quite like director Sam Gainsborough’s empathetic short Facing It. The film composites large, expressive stop motion clay faces onto actors’ bodies, creating a hallucinatory viewing experience that keys viewers straight into characters’ emotions.
It follows melancholy and anxious Shaun a he waits for his parents in a busy pub full of confident, happy drinkers. As he flashes back to painful childhood memories, his smudgy blue faces drips and swirls, conveying his inner turmoil.
The faces have an aesthetic that is quite literally hand made. “When making this film it was really important to me that you could see the fingerprints and even more than that each drip in the film is the size if a thumb. That kind of tactile filmmaking Is something I really wanted to incorporate,” explains Sam in his making-of video.

Sam and the team took eight months and used half a tonne of clay to make the film. To bring it to life, Sam first shot the live action element of the film with his actors wearing ‘strange puppet heads’. The large, round heads featured the characters’ hair and markers to help with later animation.
“This process for making Facing It was really tricky because when we were shooting all the bodies first, getting all the postures, all these key poses, all of that side of the acting, I was having to completely imagine what the faces would even be doing,” says Sam.

MAKING IT - behind the scenes of Facing It from Mdhamiri á Nkemi on Vimeo.

Once the footage was captured, the long hard slog of animation could begin.
The team could use the footage as a backplate and try to match up the facial animation to the film, frame by frame. “I intended for it to be life size animation; it grew to be a bit bigger,” says Sam. The scale of the project was enormous, both in terms of the size of the animated models and in terms of the amount of animation to be done. “We animated people, we animated crowds, we animated a dog… we animated the main character’s face the size of a table.”
Facing It is an animation that’s been leaving its indelible thumbprints on the festival circuit since 2018, but the short has just been shared online in all its absorbing glory.