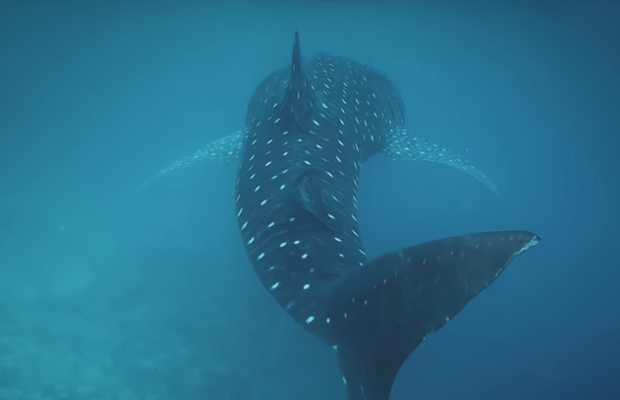 Apple's smartphone returns underwater for a mini-documentary on the Maldives Whale Shark Research Program as the latest film in its ‘Shot on an iPhone’ series.
In the 60-second spot for Apple, editor Benjamin Entrup pieces together poignant captures of director Sven Dreesbach’s underwater world, whose heroes are the whale sharks and other oceanic creatures from the long-form docu-film.
Created in cooperation with the Maldives Whale Shark Research Programme (MWSRP) engaged in the study of whale shark and in a video commissioned by Apple, the project covers the research and protection organisation. Close to extinction, the initiative’s main objective is to stimulate visibility of the environment and safeguard the species of the territory.
The short brings together beautiful underwater images of animals and researchers from the Maldives Shark Research organisation. The nonprofit group uses a proprietary iOS app to monitor the demographics and movement of various marine species, whale shark among them, to define community-focused preservation strategies and sustainability.
The video goes underwater to show shots of whale sharks and the researchers that are studying them, in addition to showing how the team utilizes Apple products above water to further their conservation goals.
An advocate of environmental protection in addition to being friends from Germany, Benjamin was drawn to working on the project as a result of both his rapport with Dreesbach as well as his passion for climate issues.
“When Sven asked me to help out with this project, I jumped on it because I loved the message and wanted to help tell this story in the best possible way,” says Benjamin.
“The Maldives Whale Shark Research Programme is doing important work and needs all the attention it can get, so I was glad to help support Sven and Apple in sharing their narrative and raising awareness for the vulnerability of our oceans.”
While the video was captured entirely on the iPhone, the full length docu-film annotates how third-party equipment such as the Freefly Movi Cinema Robot, the FiLMiC Pro App, the AxisGO Water Housing, and a Beastgrip, were all used during the production of the video.
Shot on iPhone XS with the aid of:
Freefly Movi Cinema Robot
FiLMiC Pro
AxisGO XS Max/XR Water Housing for iPhone XS Max
Beastgrip

Lexus Has a 'One Track Mind' in Zippy Slot Car Campaign