All Mariah Carey Wants for Christmas is… a Pack of Walkers 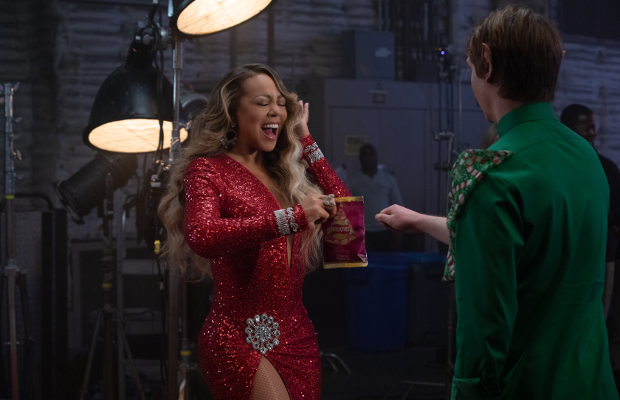 What better time to unite with a global megastar than 25 years after the release of her iconic anthem, All I Want for Christmas Is You? This year Walkers is launching its biggest ever Christmas campaign featuring no-other than Mariah Carey.
The campaign, created by AMV BBDO, features Walkers core & limited edition festive flavours, notably Pigs in Blankets.
Taking place on the set of a music video, the ad opens on Mariah singing All I Want for Christmas Is You wearing a sparkling red festive dress as the cast and crew sing along. The shoot wraps, and as Mariah walks through the set generously handing out increasingly humorous presents, including a framed painting of Mariah herself riding a winged unicorn, she says: “I love Christmas. It’s a magical time. A time for giving, a time for caring, a time for sharing.”
What follows is a real dilemma for our megastar as she reaches for the final pack of Walkers Pigs in Blankets at exactly the same time as a Christmas elf.  Christmas may be a time for sharing, but not when it comes to Walkers crisps. A polite tussle ensues, and Mariah decides to use her famous high note to get the elf to drop the bag, winning the crisps for herself. The narrator says: ‘Walkers, too good to share.’
But it is Christmas, and as the ad closes, Mariah decides to offer the elf just one crisp from her coveted bag, only for that to backfire in a hilarious final comic twist.
The 60-second ad was directed by multi-award-winning music video director, Joseph Kahn, who has worked previously with Mariah Carey, as well as countless other celebrities, from Britney Spears and Lady Gaga to Eminem, giving it an extra special touch.
The film launches in a Twitter Spotlight takeover throughout Saturday, November 2nd (starting at 12:01am for 24 hours) to build conversation, and then will be followed up by the TV debut during the X Factor finale in the evening. The campaign is a truly multi-media spaning TV, VOD, digital, social, and on-pack promotion.
Mariah will be appearing on promotional packs of Walkers up until Christmas, alongside a promotion that gives consumers the chance to win all they want for Christmas. Shoppers will have the chance to win top prizes every hour, including game consoles, designer headphones, cash and even festive socks.
Wayne Newton, head of marketing at Walkers, said: “It doesn’t get more Christmassy than Mariah Carey singing All I Want for Christmas Is You and that’s exactly what’s in our new advert. As well as entertaining the nation with our trademark humour, the campaign brilliantly launches our festive flavours for the season. This year is one of the biggest yet for Walkers, with our new campaign, limited edition flavours and huge on-pack promotion – we hope consumers will love it.”
Mariah Carey said: “I had a lot of fun filming this commercial with Walkers. I’ve always loved their crisps from my trips to the UK and everyone knows I love feeling festive, so it was the perfect collaboration for me – it’s also a great way of celebrating the 25th anniversary of All I Want for Christmas Is You!”

Editor: Scott Cato at The Quarry

Love Means Not Having to Compromise in Asda's Valentine's Day Spot

Quaker Encourages the UK to ‘Go Forridge’ for Topping Inspiration