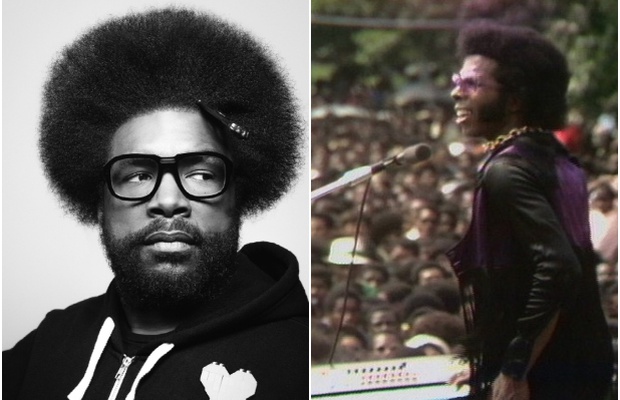 Producers Robert Fyvolent and David Dinerstein have announced the start of production on 'Black Woodstock', a feature documentary about the Harlem Cultural Festival directed by Ahmir 'Questlove' Thompson. This film marks Ahmir’s feature directorial debut and focuses on the 1969 outdoor festival in Harlem’s Mount Morris Park. The festival featured dozens of extraordinary performances by artists including Stevie Wonder, Sly and the Family Stone, Nina Simone, B.B. King, the Staple Singers, the 5th Dimension, David Ruffin, Mahalia Jackson and Gladys Knight and the Pips. The Harlem Cultural Festival took place the same summer as the famed Woodstock festival, and boasted an attendance on par with that concert 100 miles away. Over 300,000 people attended, yet it received virtually no coverage from the mainstream media. The 40 hours of never-seen-before footage was originally shot by the late television pioneer Hal Tulchin, but has remained in storage for the past 50 years, keeping this incredible event in America’s history lost - until now.

“I am truly excited to help bring the passion, the story and the music of the Harlem Cultural Festival to audiences around the world,” said Ahmir 'Questlove' Thompson. “The performances are extraordinary. I was stunned when I saw the lost footage for the first time. It’s incredible to look at 50 years of history that’s never been told, and I’m eager and humbled to tell that story.”

Producers Robert and David (Cries From Syria; Winter On Fire: Ukraine’s Fight For Freedom) have tapped the award-winning RadicalMedia (What Happened, Miss Simone?) as creative and production partners, with Jon Kamen and Dave Sirulnick serving as executive producers. The film is co-produced by Vulcan Productions. Concordia Studio, Play/Action Pictures and Beth Hubbard will also serve as executive producers. Joseph Patel will serve as a producer with Joshua L. Pearson (What Happened, Miss Simone?) on board as editor and Randall Poster (Grand Budapest Hotel ) as the music supervisor.

“The music and performances in Black Woodstock will knock audiences out of their seats,” said producers David Dinerstein and Robert Fyvolent. “The footage is unusually rich in texture and feel. We are so proud to be working alongside Ahmir 'Questlove' Thompson on his directorial debut. We are confident he will bring an authenticity and unique vision to the film. We are thrilled to partner with some of the best people and organizations working in the documentary space today including Vulcan Productions, Concordia Studio, Play/Action Pictures and RadicalMedia.”

The 1969 Harlem Cultural Festival came to be known as 'Black Woodstock' by local Harlem residents. It was organised and produced by Tony Lawrence who also served as the master of ceremonies. The idea behind this festival, which took place one year after the death of Dr. Martin Luther King Jr, was to celebrate African American music, culture and politics, and to promote black pride and unity. While young white America was defining itself as the Woodstock generation, young black America was finding its own voice. Over six consecutive weekends, the legendary 1969 Harlem Cultural Festival captured a community in transition. Sly Stone and Stevie Wonder were bursting with youthful vitality and a young Jesse Jackson delivered hard-hitting sermons. Some of the most influential black performers from R&B, soul, pop, jazz, latin, gospel, and stand-up comedy all shared the stage. The musicianship was top notch. The range of performances presented by the festival is a time capsule of African-American entertainment.

More from RadicalMedia US

‘The Residence,’ A Haunted White House Series in the Works at RadicalMedia

Samsung Brings Back the Flip Phone with Galaxy Z Flip