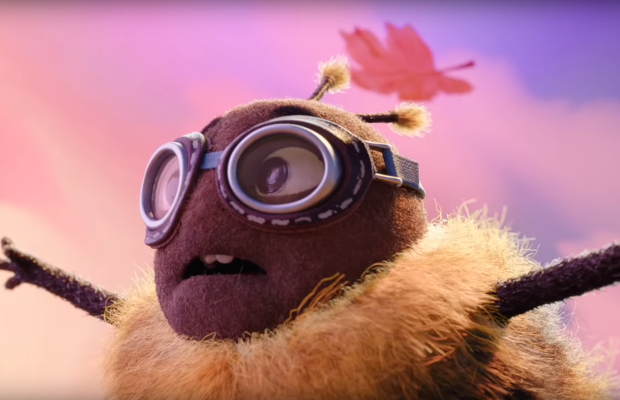 Following up a successful Christmas campaign is an appealing but tricky task. Especially when it was as pure and feel-good as last year’s Erste Group ad featuring a lovable hedgehog from directors Kyra Buschor & Constantin Paeplow.

Coming back for another round this year, the duo successfully delivered a beautifully crafted inspiring story of a bumblebee who believed in flight. The ad melted hearts around the world (and in the LBB office), and has firmly established Erste Group’s ads as a festive highlight.

To go behind the scenes of the campaign, LBB’s Adam Bennett spoke to Kyra and Constantin.

LBB> Congratulations on another great spot! Did you always know you wanted to follow up last year's ad?

Kyra & Constantin> Thank you! Last year's production was one of our favourite experiences in animation work to date. Having an agency and a client so in tune is rare and we were very happy to have the opportunity to work in this constellation again.

LBB> You can't help but feel warm inside when you watch this ad- why do you think this theme resonates so well with people?

Kyra & Constantin> Maybe it's a mixture of a story that appeals to a lot of people and also having characters that feel very tactile and touchable. It anchors the whole setting in something real which was one of the reasons why we went for this fluffy-felt-look approach.

We also poured our heart and soul into these little Characters, and sometimes, with a bit of luck, it spills over to the viewer.

LBB> And why is this time of year a good one to tell that story?

Kyra & Constantin> We believe that you can share them at any time of the year.

However, around the holiday season many people are more open towards stories about being together and sharing, so it's a nice occasion to share heart-warming short films with your loved ones so you can show them that you’re thinking about them.

LBB> Being honest - did you always expect the campaign to be as well-received as it has?

Kyra & Constantin> It's hard to foresee if a story will go viral. However, what is quite rare is that we are that enthusiastic about a project and also so happy with the end result, as we were in this case.

LBB> And what were your aims and ambitions going into this project?

Kyra & Constantin> Being commissioned with a follow-up to a successful film does always come with quite a bit of pressure. So we tried our best to push the stop-motion look further and make the characters even fluffier and the backgrounds even more elaborate! In addition to that we tried our best to tell an even more complex story in a shorter amount of time and to round it all up we doubled the amount of characters! Well, of course, more is not necessarily better but we tried to give the story all it needs to work and from there we just hoped that the film flies on its own.

LBB> What was the most difficult aspect of production and how did you overcome it?

Kyra & Constantin> What was quite tricky about this years film was to tell the story in the short amount of screen time. The story does imply quite a few important story beats that had to be told in a short amount of time in order for the plot to make sense. Especially the introduction where we needed to establish the concept of the ‘non-flying bumblebee’ was quite a challenge to keep it short. Therefore, from the initial script we had to tweak quite a few things and cut it down to the least amount of shots needed in order to tell the story and still leave enough time for the characters emotions to play out.

LBB> You guys have done loads of amazing animated work in the past - what is it that draws you to animation over live action?

Kyra & Constantin> What we love about animation is that it is so versatile. With every project you can explore a whole new route, a whole new style. You can create worlds and characters from scratch without being limited to a real-life set or the abilities of an actor.

Kyra & Constantin> We’re very happy with the outcome of the film and want to thank our amazingly talented team for making it possible.