This Painful Campaign Highlights the Severity of Celiac Disease 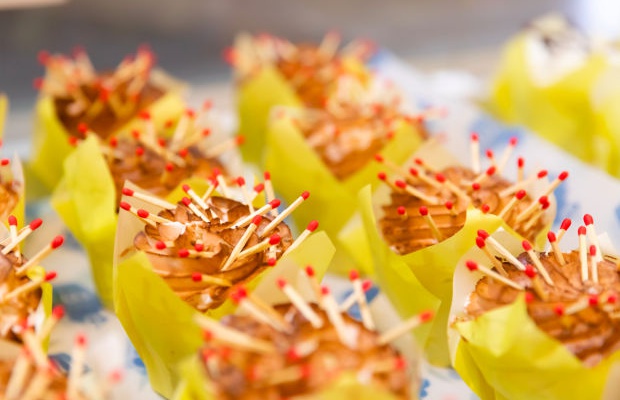 Boston advertising agency Hill Holliday has partnered with celiac disease organisations Celiac Disease Foundation and Beyond Celiac to create a marketing campaign showing how painful it is to live with the disease. To help bring the seriousness of Celiac disease to the masses, the campaign shocks people with images of food with frighteningly painful ingredients – nails, scorpions and tacks. In the eyes of someone suffering from Celiac disease, this is what food with gluten looks like because it’s also what it feels like.

The campaign was created with the participation of five different celiac disease and gluten-free advocacy organisations, and research with dozens of celiac disease sufferers.

During May, Celiac Awareness Month, the agency also created Celenia’s Cupcakes pop-up shop in South Station, Boston’s busiest train station. Cupcakes like 'Chocolate Thumbtack Surprise' and 'Vanilla Rusty Nail Crunch' were on display to first surprise and then educate passersby. A dedicated team was on hand to showcase the cupcakes, distribute educational materials and direct people to the dedicated website.

In addition, 'Not-So-Tasty' food-prep videos on the website and Buzzfeed show seemingly delicious items like pasta salad, cupcakes, and pizza, but with one jarring twist, they include ingredients like razor blades, nails, scorpions, and thumbtacks, viscerally communicating just how painful it is for people with Celiac disease to eat food that contains gluten.

The campaign is designed to educate, raise awareness and inspire compassion for sufferers of the disease. The fact is, most people confuse gluten-free diets with Celiac disease. They are not the same. Celiac is a genetic, autoimmune disorder that is caused by gluten which results in a number of severe symptoms. Left untreated, Celiac disease can lead to additional serious health problems like Type 1 diabetes, multiple sclerosis (MS), anemia, osteoporosis, and intestinal cancers..